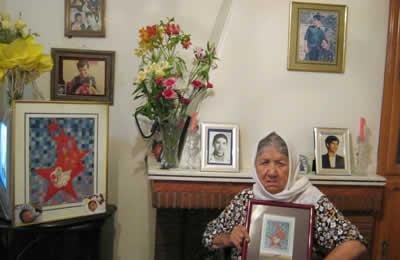 In the morning of Sunday, January 3, 2016, Mrs. Nayyereh Jalali Mohajer, known as Mother Behkish, passed away in her house in Tehran.

The Iranian clerical regime had executed five of Mother Behkish’s children and her son-in-law in the 1980s.

Mother Behkish spent most of her life outside prisons to visit her children or in the cemeteries, especially Khavaran where the victims of 1988 massacre of 30,000 political prisoners in Iran have been buried en-mass. She demanded the authorities to give her information about the place of burial of her children and the manner of their deaths, but authorities refused to give respond to her request.

May she rest in eternal peace.