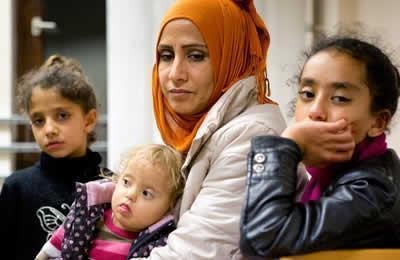 One Syrian woman who joined the stream of migrants to Germany was forced to pay down her husband’s debt to smugglers by making herself available for sex along the way.

BERLIN — One Syrian woman who joined the stream of migrants to Germany was forced to pay down her husband’s debt to smugglers by making herself available for sex along the way. Another was beaten unconscious by a Hungarian prison guard after refusing his advances.

A third, a former makeup artist, dressed as a boy and stopped washing to ward off the men in her group of refugees. Now in an emergency shelter in Berlin, she still sleeps in her clothes and, like several women here, pushes a cupboard in front of her door at night.

“There is no lock or key or anything,” said Esraa al-Horani, the makeup artist and one of the few women here not afraid to give her name. She has been lucky, Ms. Horani said: “I’ve only been beaten and robbed.”

War and violence at home, exploitative smugglers and perilous seas along the way, an uncertain welcome and future on a foreign continent — these are some of the risks faced by tens of thousands of migrants who continue to make their way to Europe from the Middle East and beyond. But at each step of the way, the dangers are amplified for women.Interviews with dozens of migrants, social workers and psychologists caring for traumatized new arrivals across Germany suggest that the current mass migration has been accompanied by a surge of violence against women. From forced marriages and sex trafficking to domestic abuse, women report violence from fellow refugees, smugglers, male family members and even European police officers. There are no reliable statistics for sexual and other abuse of female refugees.

Among the more than one million migrants who have entered Europe over the past year, fleeing war and poverty in the Middle East and beyond, men outnumber women by more than three to one, United Nations statistics show. “The men dominate, numerically and otherwise,” says Heike Rabe, a gender expert at the German Institute for Human Rights.

Susanne Höhne, the lead psychotherapist at a center in west Berlin specializing in treating traumatized female migrants, says that almost all of the 44 women in her care — some barely adults, some over 60 — have experienced sexual violence. “We go to our own therapists for supervision twice a month to cope with what we hear,” Ms. Höhne said about her 18 staff members. Together they provide two weekly therapy sessions to each woman and up to seven hours of social work, including home visits, to help them with adjusting to life in Germany.

A 30-year-old Syrian mother of four fled the war with her family early last year. When her husband ran out of money to pay their smuggler in Bulgaria, he offered his wife as payment instead. For three months, she was raped almost daily to earn her family’s onward journey.

Soon her own husband was abusing her, too. A “twisted logic,” Ms. Höhne said. “What her husband made her do ended up tainting his honor. She became the guilty party.”

The woman now has asylum and lives in Berlin with her children. Her husband, who lives elsewhere in Germany but has stalked her on the street in Berlin at least once, is under a restraining order. But she remains too terrified to provide even her first name, for fear of being killed by him or another relative over the perception that she brought “dishonor” to the family.

Ms. Höhne says the woman displays all the symptoms of post-traumatic stress disorder, including flashbacks, insomnia and trouble concentrating. “One moment she will seem perfectly healthy, the next she is in her chair opposite you dodging bullets in Damascus or reliving her abuse in Bulgaria,” she said.

In Greece, one of the main entry points to Europe for migrants, reception centers are often overcrowded and lack adequate lighting and separate spaces for single women, said William Spindler of the United Nations refugee agency. “Men, women and children sleep in the same areas,” he said. Across Europe, he added, “cases of sexual violence and family violence have been reported to our staff in the field.”

Even in the relative safety of Germany, an asylum system struggling with the logistics of accommodating close to one million migrants in 2015 has been cutting corners when it comes to basic protections for women, like lockable bedrooms.

“The priority has been to avoid homelessness,” said Ms. Rabe, the German expert on gender-based violence. “But an environment that inadvertently facilitates violence is a risk factor. We cannot allow standards to slip.”

That is easier said than done, said Jan Schebaum, who manages two homes for asylum seekers in east Berlin. There are two bathrooms per floor, and the rooms are full.

One of the homes he runs is the emergency shelter where Ms. Horani, the makeup artist, stays. Of 120 adults there, most are Syrian and Afghan, and 80 are men.

“The women are in the shadow of the men,” Mr. Schebaum said. “Their voices are drowned out, and it’s a problem.”

At the food counter, where volunteers hand out hot soup and fresh fruit, the women are often last in line. They stay in their rooms a lot and rarely sign up for activities advertised on the notice board, like museum visits or concerts. One Syrian woman has not left the building since arriving two months ago because her husband, who has not yet arrived in Germany, prohibited her from doing so.

In the laundry room, stories of domestic abuse circulate in hushed conversations among the women. There is a violently jealous husband on the fourth floor who has beaten his wife. There is a woman who has been beaten by her husband because they cannot have children. A couple of months ago, two Afghan men harassed an Afghan girl with lewd comments and pushed her off her bike before others intervened, a volunteer at the shelter said. But few incidents of violence are reported.

The asylum claims of married couples are often linked, Ms. Rabe said, making the women more dependent on their husbands and more reluctant to be separated. In theory, German law is well equipped to deal with domestic violence, she said. But in practice, measures like the physical separation of partners are hard to carry out inside a shelter.

The first time Mr. Schebaum learned about a husband beating up his wife he called the police, only to find the wife shouting at him for “stealing her husband.” Since then, he deals with reports of violence mostly through mediation, and by trying to empower the women in his homes.

Last month one of his volunteers started a weekly walk for women. Even husbands who were initially skeptical allowed their wives to go. One woman left the premises for the first time. In the park she played a song on her cellphone and started dancing. “The longer we were outside, the more confident she became,” recalled the volunteer, Vivien Roos, a 34-year-old yoga teacher.

There is now an all-women knitting evening and an aerobics class. On Wednesday mornings, small groups of women go to the house of a volunteer for a private shower, nail-painting and grooming session.

One afternoon a week, female social workers take migrant women to a cafe across the street for a “coffee hour.” The walls are covered in graffiti, and it smells of smoke. But no matter. When Ms. Horani arrived with a large Arabic music selection on her smartphone, the scruffy interior was transformed into a bobbing sea of dancing head scarves.

As some women painted their hands with henna and others traded frustrations about the time it was taking to get refugee status, Samar, a 35-year-old former employee of the Syrian Finance Ministry, opened up about the particular stress of being a woman on the move. Bombed out of her home in Darayya, a suburb of Damascus that early in the civil war became known for antigovernment protests, Samar spent 14 months on the road alone with her three daughters, ages 2, 8 and 13.

“I did not leave them out of my sight for one minute,” she said in Arabic, speaking through an interpreter. She and other single mothers slept in shifts along the way, watching over their daughters and one another.

But in Izmir, Turkey, about to board a boat to Greece, Samar was robbed and left with no money to pay the smuggler. A stocky man who called himself Omar, he offered to take her for free, but only if she had sex with him. Samar had heard him before, at night, in the hostel where she and other refugee women were staying, “going to this room and that.”

“Everybody knows there are two ways of paying the smugglers,” she said. “With money or with your body.”

But she refused, and Omar became angry. That night he burst into Samar’s room, threatening her and her daughters before her screaming chased him away. Samar stayed in Turkey for almost a year to work and save up the 4,000 euros needed for the remainder of the journey.

Sitting with her youngest daughter curled on her lap, Samar concluded: “Almost all men in the world are bad.”

Across town, in west Berlin, Ms. Höhne sympathized, but had a more nuanced view. There are no easy solutions, she said. Female-only shelters are not an option because most families want to stay together. Some women rely on men for protection. And, she added, “We mustn’t forget many of the men are traumatized, too.”