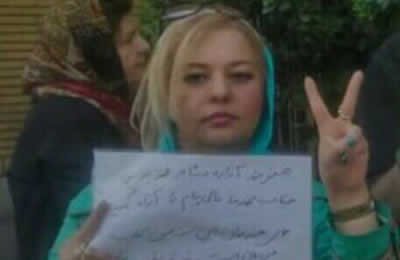 Ms. Shokufe Azar Masuleh, a detained civil activist, in a published letter from Tehran’s notorious Evin Prison describing her conditions, saying after six months in detention she has neither been able to see her lawyer, nor has her lawyer been able to review her case.

Shokufeh Azar has protested her charges and the judicial process in her case. After losing her parents, she has been deprived of any visits during the past six months.

Her letter reads in part:

“My name is Shokufeh Azar Masuleh, alias Parisa Azadi, and I am doing my graduate studies in international business management. On June 8, 2015, the night before my college final exams, I was arrested by the Ministry of Intelligence without any court warrant. They searched my home without stating any reason for the arrest. They transferred me to Evin Prison’s ward 209 without informing any of my relatives.

“I was placed under pressure under interrogations for over two weeks in Evin’s ward 209, and afterwards I was transferred to the women’s ward. For 69 days I did not even learn about the charges raised against me.

“On August 15, my arraignment hearing was held and the charge of propaganda activity against the state was registered in my file. The interrogator added the charge of actions against national security.

“During the past six months after being detained, I have been deprived of any visits because my parents have passed away and I am the only child. I was not even permitted to have any contacts with my relatives to follow up on my case or receive advice from a lawyer.”