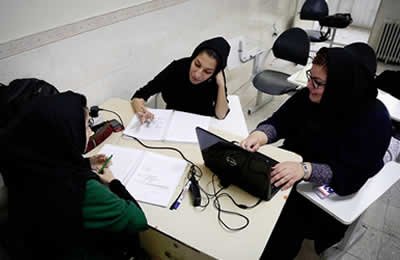 The extent of participation or exclusion of women in a society has been used as the index of growth in developed or developing countries. In Iran,

women are being excluded from society on a daily basis, resulting in depression, suicide, addiction and other social disorders that have reached an alarming level.

Last month, the Iranian regime’s national television examined the status of women through the statistics provided by one its economy experts. Mohsen Ranani, said:

“The involvement of women in a society is a measure of growth and this has not been observed in Iran, as we are among the last three countries when it comes to the participation of women.”

Mesbahi Moghadam, a member of the Iranian regime’s majlis (parliament) who also participated in the same TV program, protested the economy expert’s claims and said, “Why do you start your claim that the growth of a country is indexed by women’s growth? Why do you not speak about the high number of female students entering universities and their participation in undergraduate and postgraduate fields which are over 60%?”

Moghadam tries to relate the high presence of Iranian women and girls in universities to the clerical regime’s achievements, while this social and cultural growth demonstrates Iranian women’s protest against an oppressive government that promotes gender inequality through harsh and callous forces and misogynistic laws. According to the Iranian regime’s laws, a woman is worth half a man, does not have the right to divorce nor have the custody of her children after divorce. Women need permission from their husbands to travel. Women are banned from majoring in 77 different university fields. Even those at universities are harassed on a daily basis by for their appearances, in an attempt to push them to stay home. Even at the job market, women do not have many chances, because the jobs are deliberately tailored for men so that women could not hold executive and political positions. According to the state-run Etemad daily (July 2015), about 3.5 million educated women are jobless.

“We usually define a job as an activity to make money. This is not right. A job is what a woman is doing. Her job can be inside or outside her house. Housekeeping, taking care of a child and managing the household is a big job.”

Molaverdi, Rouhani’s deputy in women’s affairs, admitted that being jobless has resulted in depression and increased use of narcotics by women.

Ranani, the expert provided the solution, when asked what needed to be done;

Iranian women have been fighting for their social rights for over 100 years. They deserve a democratic government. The only solution to restoring the rights of Iranian women and assuring economic and social growth in Iran is “change”.

Iranian women find their answers in the National Council of Resistance of Iran and the People’s Mojahedin of Iran, where women’s participation is above 50% at all political and executive levels. This active involvement of women in the most important task of all, resistance against the fundamentalist Iranian regime, is the factual promise for gender equality in a free and thriving Iran.