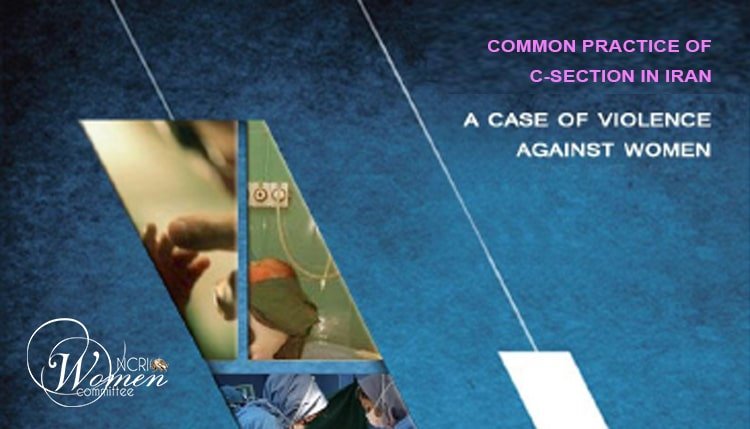 Cesarean surgeries are relatively heavy operations that doctors carry out to reduce life threatening risks if any abnormal conditions occur for a mother and her baby during birth.

Any intervention to natural delivery, including via Cesarean section which usually should be limited to the few and limited cases, are considered as acts of violence against women and their babies by some organizations and experts.

According to article 39B of the Council of Europe Convention on preventing and combating violence against women and domestic violence (Istanbul Convention): “Parties shall take the necessary legislative or other measures to ensure that the following intentional conducts are criminalized: performing surgery which has the purpose or effect of terminating a woman’s capacity to naturally reproduce without her prior and informed consent or understanding of the procedure.”

In general, 90% of labors are natural and 10% are carried out as cesareans. The World Health Organization (WHO) announced in 1985 that countries which have lower rates of deaths during childbirths, also carry out less than 10% Cesarean operations.

However, research shows that the rate of Cesarean sections in Iran is very high and infant mortality in Iran is equivalent to 6 per 1000 births, which means 9 to 10 times that of developed countries.

Iran ranks first in counts of Cesarean sections throughout the world. While the World Health Organization considers the standard number of Cesarean deliveries between 10 to 15% of all births, the Iranian regime’s state media have published a painful reality.

“Studies in our country show that from 1981 to date, use of C-section in a governmental center has moved from 14 to 78 percent, while in private hospitals, Cesarean deliveries is almost carried out 100 percent.”

Shahla Mirgalobayat, a member of the Iranian regime’s parliamentary health committee, revealed, “In 2015, the rate of Cesarean sections has reached 45 percent. However, in Europe and even in developing countries, the figure is 15 percent. ”

Mohammad Ali Hemati, deputy chief of the Social Security Organization, also confirmed nearly the same figure and said, “In the first six months of this year, 108,550 deliveries were carried out in 60 hospitals, 43% of which were C-sections.”

The situation is not more promising in smaller cities. Mohammad Reza Ebadian, vice-president of Hamedan University’s Medical Sciences Department said, “In previous years, 50% of deliveries were carried out by Cesarean sections.”

Fariba Amin-Zadeh, a member of the Faculty of Medical Sciences in Rafsanjan University, said, “Last year there were over 5500 births in Rafsanjan’s Nicknafass Medical Training Center, of which 47% were Cesareans and 53 percent were natural.”

These statements, however limited and partial, show only the tip of the iceberg, emphasizing that the Cesarean section has become a common practice in Iran.

Why are C-sections so common in Iran?

Under the Iranian regime’s rule, where the lives and health of people, particularly women, are not important in policy making, the method of birth is also another occasion for violating women’s rights and at the same time profiteering by regime officials.

There are a variety of reasons to the high numbers of C-sections in Iran, however, the root cause to all are found in the corrupt nature of the state affiliated bodies who subsist by plundering people. Some specialists affiliated to the Iranian regime related the prevalence of C-sections to mothers’ fear of pain during birth, which in itself is a tacit admission of the regime’s lack of resources, policy failures and incorrect methods of natural deliveries in Iran.

The state-run Physicians website wrote, “The most important reasons that pregnant women decide to undergo Cesarean sections, are the lack of painless procedures as well as mistreatment of pregnant women. Unfortunately, pregnant women are not treated well in hospitals and they may have to endure long hours of pain. Whereas, during a Cesarean section, the mother is unconscious and does not feel anything.”

“The best and most common way to give birth without pain is to use local anesthesia or epidural… Of course, the insurance should pay the cost of the epidural, but only handful of insurances accept to pay these costs in Iran. Therefore many women who want to have a natural childbirth, are not able to afford epidurals. ”

The secretary of the Mumtaheneh Anesthetic Board, Seyed Sajad Razavi, points out another perspective of the health system’s failure in Iran and says, “Painless childbirths depend on the anesthesiologist’s knowledge and skills. There is a weakness in this area and our major problem in this area is the lack of equipment and new technologies.”

A mothers’ calm has a lot to do with the amount of calm passed on to her by midwives and medical staff. Unfortunately, midwives –like many other social sectors in Iran– do not have enough calm and capacity to handle and behave correctly, in this case with mothers as a result of themselves being deprived of their basic rights and mass employment problems. They receive only 10 to 15 percent of the tariffs from maternity insurance for every 2 or 3 deliveries and 7 or 8 pregnant women they must care for at once.

Nahid Khodakarami, head of Iran’s Obstetrics Association, said, “The health reform plan states that delivery tariffs are equal for midwives and doctors, but when wages are paid, the tariff for midwives gets very small.”

Khodakarami also highlighted a large shortage of midwives in hospitals while there is a larger number of graduate students who await being employed. She asserted, “In the most optimistic case, while our hospitals are short of almost 9000 midwives, we have 10 to 15 thousand unemployed midwives.”

Alireza Zali, President of the Iranian Medical Organization, said, “Despite their competency, the midwifery community is among those social sectors that has the highest rate of unemployment with plenty of demands.” (Ministry of Health website, Salamat News – 3 May 2015)

“The cost of natural labor for non-insured women in public hospitals starts from 25 thousand toumans whereas a Cesarean section delivery costs some 90 to 120 thousand toumans. In some private hospitals in Tehran, the cost for a Cesarean section delivery can reach over 1 million toumans which includes hospital fees and fees for the surgeon and his assistant.

It is clear that aside from systematic insufficiencies due to government incompetence including its inability to provide the necessary facilities for natural childbirth and hire adequate number of midwives to care for mothers during labor, the main reason is that public and private hospitals are involved in systematic plundering by providing more facilities for Cesarean section than for natural childbirth. And the government either condones this practice or is turning a blind eye on it, to say the least. The following news piece is quite telling in this regard:

“In a hospital in the city of Salmas in West Azerbaijan province, a pregnant woman who should have been operated on to give birth as diagnosed by her doctor, died during natural delivery because she couldn’t pay for Cesarean section.”