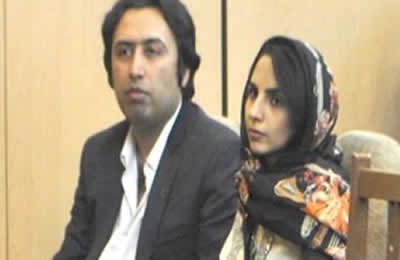 Iran: Poet Fatemeh Ekhtessari and her husband might run away

Media outlets close to the Revolutionary Guards have claimed two Iranian poets Ms. Fatemeh Ekhtesari and her husband, Mr. Mehdi Moussavi, who had been sentenced to long-term prison sentences and whipping, have fled Iran.

For now there is no sign of these two poets other than an image.

Branch 28 of the Tehran “revolution” court chaired by judge Notorious Judge Moghiseh had sentenced Moussavi and Ekhtesari to a total of 198 lashes and 20 years behind bars. The poets face charges including, “insulting the sanctities”, “posting improper images on the Internet” and “shaking hands with the opposite sex outside of their family”.

Moussavi had previously revealed on the social media that the “revolution” court issued its ruling before he presents his defense statement.

The passports of Moussavi and Ekhtesari were confiscated in November 2014 when they intended to leave Iran to take part in a literature event. They were then summoned to the prosecutor’s office, which they refused to go and were finally arrested on Sunday, December 8, 2014. They were held in ward 2A of Tehran’s notorious Evin Prison.

The Iranian Writers Guild, the American Pen Association and the World Pen Association, as well as over 270 writers from across the globe participated in an event from October 13 – 16, 2015 in Quebec, Canada, condemning the “revolution” court order against thetwo Iranian poets.