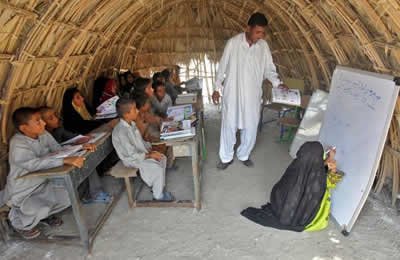 Illiteracy rates among girls and women in Iran have become a cause for concern and in over 40 cities, the situation has become grave.

According to Iran’s Statistical Centre, there were 9,483,028 illiterates in Iran in 2011, 6,250,965 of whom were women, which is approximately two-thirds of the total population of illiterates.

Drop-out of girls older than 6 years of age is widespread in three provinces of Sistan-Baluchistan, Western Azerbaijan, and Eastern Azerbaijan and comprises the country’s highest rate of illiteracy alone.

In a meeting at the Iranian regime’s Parliament on 16 December 2015, Zahedan’s deputy announced that 156,000 girls in Sistan-Baluchistan have been excluded from receiving any form of education. The head of Sistan-Baluchistan’s Board of Education said, “Each year, many students in the remote areas drop out of school due to lack of access or adequate schools. For example, in the village of Espakeh, 319 girls in their first year of high-school were forced to drop out because of shortage of schools for these girls. The nearest high-school is located 40 km from their village.” (State-run Mehr News Agency, 6 December 2015)

Saravan’s deputy reported to a meeting in Parliament on 14 December 2015 that “coed high-school classrooms and poverty” were among the main causes of girls dropping out in this region. Statistics show that the rate of female drop-outs in the western part of Khuzestan and cities along the Iran-Iraq border are alarming.

Hormozgan province in southern Iran has 14,000 school drop-outs. In addition, girls’ educational status is quite unfavorable in Eastern and Western Azerbaijan provinces, Kurdistan, and North Khorassan.

Some of the girls are prevented from continuing their education as a result of early marriage. An administrative clerk in a village in Khuzestan province said, “About 50% of boys and almost all girls have no choice but to drop out of school because there are no middle schools here.” There are currently no girls’ high school in the city of Hoveyzeh. Amongst the 40 villages in this region, there are no schools dedicated for girls, as a result of which the majority of girls have been compelled to leave their education.

Dezful’s Director of Education reported the situation of girls’ education as “disturbing” and said, “Girls make up 60% of the 500 students who have been deprived of education over the past three years.”

The Director of Education in Kohgiloyeh and Bouyer Ahmad Province has similarly announced, “Of those students who drop out, many are girls, who do so as a result of financial problems.” (State-run Fars and Mehr news agencies, 7 January 2016)

In spring of 2015, the Director of Education in Western Azerbaijan reported of 1500 cases of school drop-outs. On 7 January 2016 he indicated that there has been a 6-fold increase to the number of drop-outs since last year.

Surprisingly, reports have shown that not only girls are dropping out of school in Iran’s disadvantaged provinces, but that Tehran and its surrounding cities are also experiencing an increased rate of female drop-outs.

In October 2015, the director-general of Tehran’s Department of Education disclosed that 25,000 school-aged children in this city are working instead of attending school. According to a report by the state-run ANA news agency, the girls in Tehran’s Herandi district are unable to pursue their education or even leave home because of the detrimental atmosphere in this region, namely the large number of homeless and addicted people sleeping in the parks and the streets.

The phenomenon of girls dropping out of school is spreading while Iran with some 9.5 million illiterates already ranks 120th on the world’s literacy scale.

Gender gap is particularly obvious in economically retarded areas, where low incomes and poverty lead to children’s participation in earning the family’s revenue and prevent them from continuing their education. Such reasons become more legitimate when it comes to girls.

In a message on the beginning of the new academic year 2015-2016, the Iranian Resistance’s President-elect Maryam Rajavi said, “Every year, at least a quarter of Iran’s students are forced to quit school with a large number of them joining the children of labor, whose population is around 2 to 5 million today. In the past few years, Rouhani ordered shut-down of many schools in rural communities as a way for budget cuts.”

Mrs. Rajavi declared, “In tomorrow’s Iran, we would need an advanced educational system which shall be free and compulsory to meet the needs of all children in the country.”