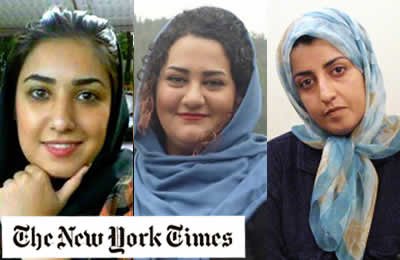 Twenty-eight year-old Atena Farghadani felt a sense of outrage when her government, the conservative legislators of Iran, tried to criminalize voluntary sterilization in 2014. It was the latest move to restrict women’s reproductive choices, and Farghadani, a talented painter and budding activist, decided to speak out.

Farghadani drew a cartoon depicting legislators who supported the bill as monkeys and cows and posted it to Facebook. Shortly after her post, the Revolutionary Guard showed up at Farghadani’s doorstep, searched her home, arrested her, and charged her with insulting the government, disseminating propaganda, and colluding against national security. They alleged that her meetings with the families of political prisoners constituted a crime in itself, and quickly made her a political prisoner, too.

Farghadani has told advocates that she has been beaten, held in solitary confinement, verbally abused, forced to strip naked, and forced to undergo virginity and pregnancy tests by the prison guards, according to advocates and experts with Movements.org, a human rights organization that helps digitally connect activists in closed societies and has been compiling stories of political prisoners like Farghadani.

Farghadani, who appeared in a YouTube video criticizing her arrest in 2014 and was subsequently re-arrested, for “illegitimate sexual relationship short of adultery” and indecency charges after shaking hands with her lawyer, also posted an open letter to Facebook addressed to Supreme Leader Ayatollah Ali Khamenei in 2015, criticizing the Revolutionary Guard for her maltreatment.

“What you call an ‘insult to representatives of the parliament by means of cartoons’ I consider to be an artistic expression of the home of our nation (parliament), which our nation does not deserve!” Farghadani wrote in the letter posted to Facebook. “And what you refer to as an ‘insult to the Iranian Revolutionary Guards and the three branches of government during the course of interrogation’ I consider to be a firm response to the arrogance of your armed forces about the so-called ‘security’ and ‘power’ that causes them to ‘entrap’ provocateurs like me.”

During her time in prison, Farghadani has come to represent the plight of many female political activists in Iran, a population that is increasingly targeted by the country’s conservative Muslim government as it tries to scale back women’s rights, to buffer Iran against Westernization, according to Movements.org and Iranian experts.

Roby Barrett, a Gulf region expert with the Middle East Institute and a senior fellow with the Joint Special Operations University, said that Iran is wary of America’s cultural influence spreading to its devoutly Muslim society, and that America’s greatest threat to Iran isn’t a military threat but a social one. “They’re going to be really hyper about that. As a result, one of the biggest symbols of that is women’s rights and position of women in society and so I think it’s absolutely going to continue to regress,” Barrett said.

The Iranian government has been scaling back women’s rights for decades, despite the fact that Iran was once at the forefront of women’s rights in the region, Barrett said. The government’s repeal of the Family Protection act in 1979, following the Islamic Revolution, reduced the marriage age in the country from 18 to 9 years old, as outlined under Sharia law, shut down family planning clinics, required women to wear the hijab, outlawed abortion, and legalized bigamy among other actions.

The Family Protection Act was the “most important law regarding women no matter what,” according to Haleh Esfandiari, founding director of the Middle East Program at the Woodrow Wilson International Center for Scholars and a native of Iran. “It gives the rights to women that are not necessarily given within the Sharia.”

Since the law’s repeal, nearly 80 official actions have been taken to restrict women’s access to civil life, according to Sara Hassani, an expert in Iranian culture with Movements.org. Most recently, she said, there have been drastic restrictions placed on women’s reproductive rights and an attempt to restrict women’s access to the workforce, shortening the hours they are allowed to work and preventing them from working in environments where men and women may mix, such as a restaurant. As a result, unemployment is rising among women.

But there has been constant pushback from Iranian women, according to Hassani and Esfandiari. Women have continued to skirt the government’s strict dress code laws, wearing brightly-colored headscarves, dresses that are too short, and full makeup in public places in Tehran. And female employees, including nurses and teachers, have regularly gone on strike since 2014 to push for better working conditions, Hassani said.

Some women have faced assault and punishment for their actions. Women have been subjected to random acid attacks while driving or walking down the street, Hassani added. And many activists, like Farghadani, have been taken as political prisoners. “The government has tried very hard to enforce [these rules] in public places but they really haven’t succeeded. In streets, in cafes, and at university you see women and men mixing and mingling. Over the years they have arrested women for breaking these rules, but they have not succeeded,” Esfandiari said. “Neither lashing nor punishment have stopped women,” she added.

Atena Daemi is another young activist who has been sentenced to prison for her political protesting. Daemi, 27, participated in demonstrations against capital punishment, distributed anti-death penalty pamphlets, and posted political messages on Facebook and Twitter. In 2014, she was arrested and charged with spreading propaganda, insulting the Supreme Leader, and colluding against national security. She served 58 days in solitary confinement and has been sentenced to 14 years in prison, according to Movements.

Atena Damni was imprisoned after participating in demonstrations against capital punishment. (Atena Daemi/IranHumanRights.org)

The imprisonment of female activists and their treatment behind bars has only inspired greater protests, Hassani said, noting that families of the prisoners hold demonstrations regularly outside of prisons demanding access to their loved ones and medical aid.

Activists in Iran come generally from two camps, Hassani explained. There are the women’s rights advocates who lived in Iran before the Revolution and remember what full access to civil society felt like under the Family Protection Act, and there are the younger activists, who never knew a society with full participation for women. “So I see the role of older female activists of informing the population as to what rights they should have access to and should be claiming,” Hassani said.

One such woman is Narges Mohammadi, who at 39 served as the deputy head of Iran’s Defenders of Human Rights Centre, a human rights advocacy group. Mohammadi, now 43 years old and a mother of two, has been arrested multiple for her work with the DHRC, including her most recent arrest this year for anti-regime propaganda, according to Movements.org.

In a letter Mohammadi wrote while in prison, posted to Movements.org, she says that her imprisonment has affected her deeply as a mother who has been torn away from her children, but she still believes her work is for the good of her children and others around the world.

“I am a human rights activist, which means my cares and efforts are focused on improving the circumstances of people all over the world. I do not dream of power or any particular political position. What I believe in my head and my heart, and what I strive to move towards is living in a way whereby I can put a smile on someone’s face or love in someone’s heart,” she wrote. “I have faith that one day, even if I am not alive to see it, through the love created by these sufferings, there will be a better future for my children and Iranian children and children the world round.”

She was sentenced to 11 years in prison for her most recent arrest. She too has suffered behind bars, according to Movements and Reporters Without Borders, who say that Mohammadi suffered a psychological breakdown in prison and developed a seizure condition and muscle paralysis, but has neglected to receive proper medical care.

Activists like Mohammadi likely know they face persecution for speaking out, Hassani said, but the younger women who vent their political frustrations on Facebook may not realize the potential repercussions. “I don’t think it’s anticipated that drawing cartoons or writing poems would get you 15 to 20 years in prison. They’re ridiculous sentences,” Hassani said. “They’re definitely trying to intimidate the younger age, the college age.”

A recent social media campaign by activists encouraging women to post photos of themselves without headscarves online put thousands of women at risk, though it turned out to be successful, Hassani said. “They did it in large enough numbers that it was too hard for the government to come and detain them all,” she said.

Iranian actress Sadaf Taherian participated in the “My Stealthy Freedom” campaign, posting photos of herself walking around in public without a hijab on her Facebook and Instagram in October. The backlash from Iranians was so extreme, including insults from the public and a decree from the government calling her an “offender” and barring her from acting, that Taherian fled the country and is reportedly seeking refuge in the United Arab Emirates.

“I did not expect this from the people of Iran, from my own culture,” she said in an interview with the journalist Masih Alinejad after she fled. “To hear so many insults — I honestly cannot respond to them in the same way. I can only feel sorry for their reaction and I have nothing else to say.”

“I want to live in a place and live the way that makes me happy,” she said.

The increasingly-intense crackdown on women in Iran bucks a regional trend, according to Barrett, who pointed to Saudi Arabia as a counter-example in which women lived without full rights for decades and have just begun to see some progress. “But when you look at Iran, actually women’s rights have regressed and significantly they’ve regressed,” he said.

The conservative Islamic government has support among the lower-educated, devoutly religious majority population, Barrett said. The quest for women’s rights exists mainly in the educated middle class, he said. “Women’s rights is more of a class struggle in my opinion, between this Westernized middle class that really rejects in a lot of respects the strictures put on women by what they see as these low class, uneducated, working class people that really supported the regime and militia,” Barrett said.

Esfandiari pointed to that educated middle class as a hopeful sign for the future of Iranian women. “You have educated women in Iran now,” Esfandiari said. Despite the increasingly harsh punishments, including — in the most extreme cases — executions, women will continue their push for equal rights and participation in society, she said.

“As long as you have educated women, they will seek employment, they will seek full political participation, and they will push for the laws to be changed, so I think there will be progress for women’s rights.”

More information on supporting women’s rights activists in Iran is available at Movements.org.

Iran: There is no hope for vulnerable women!