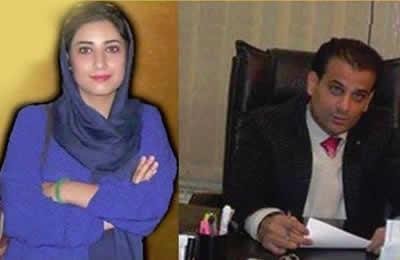 Imprisoned civil activist and cartoonist Atena Faraghdani and her lawyer, Mohammad Moghimi, were exonerated from the charge of “illicit relationship short of adultery”, for shaking hands at the start of their meeting in prison.

The decree issued on October 19, 2015, was recently made public by human rights activists.

Moghimi is a lawyer and an expert on human rights who had been arrested on June 13 and transferred to Gohardasht Prison in Karaj, west of Tehran, after meeting and shaking hands with Ms. Faraghdani, his client. Moghimi was released on June 17 on a 20m-touman bail.

However, Ms. Faraghdani went on a three day hunger strike in protest to the new charges raised against her.

Faraghdani was arrested in September 2014 and imprisoned in Evin’s ward 2A, controlled by the Revolutionary Guards. She spent two months in detention, 20 days of which was in solitary confinement. She was deprived of having a lawyer or any family visits. In prison, she found out that she was being monitored by closed-circuit cameras installed in the restrooms and showers, and said she was placed under physical and psychological harassment by prison guards. She went on a long hunger strike in protest, which led to her hospitalization on February 26, 2015, and subsequent transfer to Evin on March 3, 2015. She is presently imprisoned in Evin’s women’s ward.