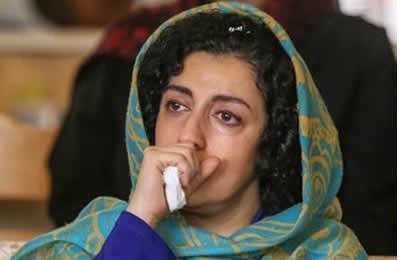 Iran: Female prisoner threatens to go on hunger strike to counter sabotage of her case

Judiciary officials have been sabotaging the case of political prisoner and human rights advocate Nargess Mohammadi and postponed the trial which had to rule over her case, three times since October.

Ms. Mohammadi’s family have requested a medical leave for Nargess but officials have not granted the request mentioning the undetermined status of her case as the reason.

Nargess Mohammadi is very ill and takes 23 different medicines every day. Recently, she was given the wrong injection in prison which could have jeopardized her life.

Nargess Mohammadi has declared that she would go on hunger strike again if such stonewalling continues on the part of judiciary officials.

Iran: Protest gathering by teachers' training graduates in front of Ministry of Education