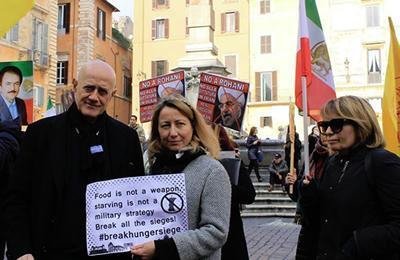 Iran: Women actively speak out against Rouhani’s visit to Europe

Rouhani’s visit to Italy and France met with a wave of condemnations by Iranians from inside Iran and abroad.

From students, youths and women, to unemployed and jobless university graduates, to businessmen and mothers of political prisoners, they protested and called for cancellation of Rouhani’s visit from all across Iran. They emphasized that Rouhani does not represent the people of Iran and urged the international community, particularly France and Italy, to take side with the people of Iran and give priority to human rights over economic interests.

The Iranian Resistance movement also staged rallies and demonstrations in Italy and France, condemning the visit to Europe by murderer of the people of Iran and urged world countries to pressure the Iranian regime for respecting human rights in Iran.

Giving coverage to these protests, the Al-Arabia TV reported: Simultaneous with Rouhani’s visit to France a large number of Iranians in Paris staged demonstrations against mass executions in Iran and export of terrorism and fundamentalism to various countries. The protesters cried out against the clerical regime and Rouhani and held them responsible for crimes against the people of Iran and the region.

Al-Arabia added: The number of executions have exceeded 2,000 only during Rouhani’s tenure which is an unprecedented figure in the past 25 years in Iran.

Italy’s RAI1 TV also reported that simultaneous with Rouhani’s visit to Italy, there were demonstrations against the wave of executions in Iran and the rocket attack on Camp Liberty where international supporters joined Iranians to protest export of Islamic fundamentalism by the Tehran regime and its support for Bashar Assad’s dictatorship and killing of the people of Syria.

Mrs. Elizabetha Zamparutti, former Italian MP, told the gathering in Rome: “It is amazing that when the doors open,” Iran “is not pressed firmly on the question of respect for human rights and the containment of the death penalty.”