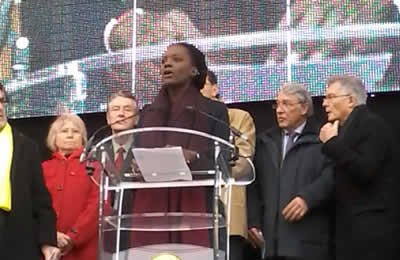 Iran: Human rights abuses must not be forsaken

The visit to France by the mullahs’ President, Hassan Rouhani, was met with great protests including by the Iranian opposition, the National Council of Resistance of Iran (NCRI).

Upon the invitation of the NCRI, more than 800 French personalities took part in the rally and addressed thousands of protesters at the Denfert-Rochereau Square.

Rama Yade, former French Minister of Human Rights, noted in her remarks at the rally:

“The painful reality of executions and human rights abuses in Iran must not be ignored. Governments must not forsake human rights for deals with the Iranian regime. Rouhani’s visit to Paris is an opportunity to raise our voice of protest. This regime tops the world’s list for executions.”

Iran: Over 4 per cent rise in divorce rate