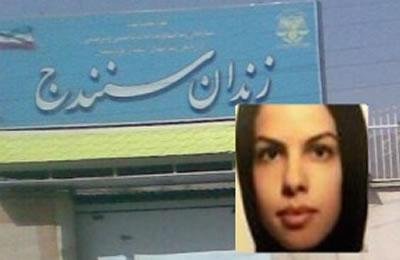 is suffering from a number of illnesses and yet the authorities are not permitting her transfer to a hospital.

Sadeghi has been detained in Sanandaj prison for five years now. This female prisoner is suffering from kidney and heart illnesses but the officials have not permitted her to receive treatment in a hospital outside the prison to this day.

“Many times she has requested from prison officials to be sent to a medical center outside of prison, yet to this day they have not permitted such a transfer,” one of her cellmates said.

“If she is not permitted to be hospitalized she may lose both of her kidneys and her health will soon be going to be in danger,” the prison clinic physician said.

Sadeghi, 26, is from the town of Salmas. Back in 2011 she was sentenced to 15 years behind bars by branch 1 of the Sanandaj revolution court on the charge of “moharebeh” (enmity to God) through her membership in a Kurdish party.

She was arrested by the Intelligence Department agents in Mashhad in November 2010 and transferred to an intelligence detention center where she was held for 4½ months under intense interrogation. (mafnews.net – January 30, 2016)