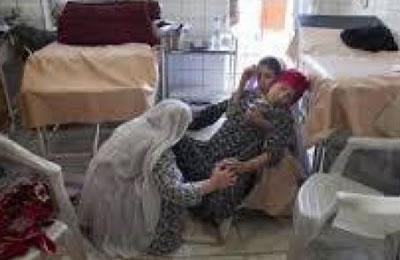 The Crisis of Hospitals, Women’s Wards in Northwestern Iranian Province

Conditions of the women’s delivery ward in Mottahari Hospital of Orumiyeh is unbearable.

The 87-year-old hospital in the capital of the northwestern province of Western Azerbaijan, in Iran, gives “service” to an average of 120 people every day without having sufficient space and equipment.

According to the president of the University of Medical Sciences of Western Azerbaijan, Javad Aghazadeh, all the hospitals in the province are very old except for two or three new hospitals.

Shortage of space, worn out facilities, peeled off the paint of the walls and old ceilings, are among the main problems.

At the same time, laboring women suffer in front of male visitors who walk into the hospital’s hallways which is the cause of great discomfort and distress.

The state of hospitals in Western Azerbaijan are but a small part of the destruction of the health care system of the country taking place under the clerical regime. As they are spending the country’s revenues and wealth on the war in Syria and Iraq and on their nuclear program, the country’s infrastructures like schools, universities, and hospitals have been destroyed. Doctors and nurses stay unemployed while hospitals lack any sufficient number of personnel and staff.

Even those working in hospitals under such stressful conditions do not get paid well, or are not paid at all, due to the country’s bankrupt economy. So there have been numerous protests over the past months by doctors and nurses across the country expressing their discontent and demanding their pay.