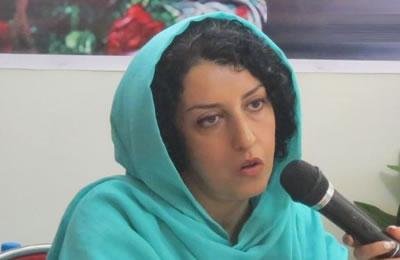 Political prisoner Narges Mohammadi revealed that imprisoned mothers in Evin Prison are deprived of any contact with their children.

“I am a mother and I have the right to hear my children’s voice even if you consider me “a criminal”, she wrote in an open letter to the Iranian Chief Justice.

The letter sent in February 2016 reads in parts:

“While I am writing this letter, there are 27 political prisoners and prisoners of conscience incarcerated in the women’s ward of Evin, seven of whom have children below 10. The women’s ward is the only ward with no access to telephones.

This protest is the voiceless cry of mothers who have been silenced for years; it is the voice of innocent and defenseless women who have been suppressed for years. Does civil activity have such a heavy price in this land? Are we some tools for the regime’s show of power for a regime that claims to be promoting justice?

As a woman and a mother, I am protesting lack of access of prisoners in the women’s ward of Evin Prison to telephones to contact their families and the fact that I have been deprived of hearing my children for 7 months.”