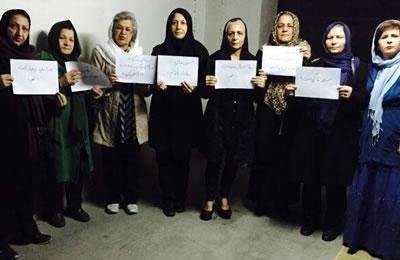 Iran: Mothers, families of martyrs and political prisoner on trial

The trial of 10 men and women, mothers, fathers and relatives of martyrs and political prisoners, was held on Tuesday February 9.

These people were mostly arrested during a peaceful gathering outside Evin Prison on January 20, 2016, and charged with “disrupting public order”.

Simin Eivaz Zadeh (mother of ex-political prisoner Omid Alishenas), Hashem Zeinali (father of missing student Saeed Zeinali thought to be murdered in 1999 uprising) and a number of Mohammad Ali Taheri’s followers were present before the court.

Mothers of martyrs and political prisoners staged a picket and carried placards to show their solidarity with those on trial.

Sholeh Pakravan wrote on her facebook account: “I can see with my heart that my country is bearing big news.”