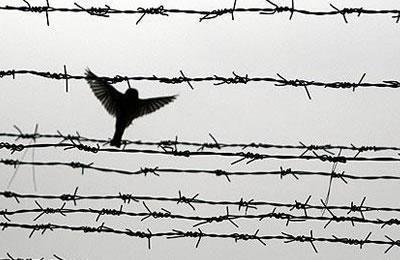 The little sparrow on the barbed wire

Ward 8 in Qezel Hessar was set aside for the punishment of prisoners.

The ward had 12 solitary confinement rooms that even with the very low standards of the prison officials, could accommodate only one prisoner. However, Lajevardi, then head of Iranian Prisons, and his puppet prison master Haj Davood, had filled each cell with 25 prisoners.

We had to take turns to sit, sleep or stand up in those little cells. But the women prisoners were so highly motivated for their cause that they would withstand all the imposed atrocities and difficulties. This story is just an example.

We had been staying in those overpopulated, tiny cells for a long time, when one day we were taken to one of the common wards to get some air. Prior to be taken out, we were gathered under the 8th ward and were given strict orders about the two hours we were going to spend in the common ward. We were forbidden from activities such as running, talking loudly, exercising in groups, touching the yard, taking any food, airing clothes, going to the parts of the ward that led to other wards, etc. Almost everything was forbidden! We were about to ask if breathing and taking in fresh air were also forbidden! We were jokingly advising each other not to breathe when walking with a friend!

Walking in the ward’s yard, some of us noticed a sparrow that was caught inside the barbed wires above the wall. We tried to release the bird by throwing stones to the sides of the wires to no avail! But we were adamant to release the bird from those wires. We decided to climb on each others’ shoulders and then use a stick to release the bird. One of the stronger girls bent her back, and two others climbed on her back to form a 3 person ladder. We held the three to keep them from falling. The third person used a stick and hit the wire until the bird was released.

The little sparrow chirped and left the prison! We all started blowing kisses and yelling: “…She is free, it is free….the bird is free…,” while stomping and jumping in exhilaration. Our jubilation alarmed the inspection tower, who reported questionable noises in women’s ward to the prison administration!

A bunch of female revolutionary guards swarmed to the yard, yelling, “Who has escaped… Who has gone? Where did she go?” … We told them that she would not come back and is gone!

The wardens put us in the line and started a headcount, while hitting and yelling. One of the girls said that a bird was freed from the barbed wire. We knew we would be punished but were eternally happy to have freed the little bird.

Many of those girls were killed during the mass executions of 1988. Some of their names are Ashraf Fadaii, Manzar Moridi, Fahimeh Jame Kalkhoran, Effat Esmaili, Roya Khosravi, Foruzan Abdi, Soheila Mokhtar Zadeh, …..

Those girls became sparrows who died to bring peace and freedom to Iran. Sparrows who could not be helped to their freedom.

Where is the back of that friend

Who can release me from the noose

Oh, who will free my friends…

They have now joined the eternity