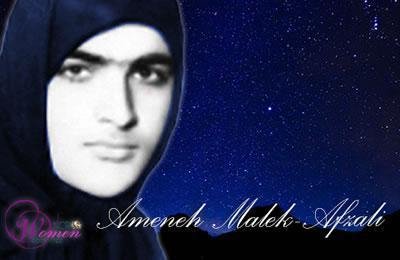 Method of execution: shot to death

Ameneh Malek-Afzali was born in 1961 in a village near Kyakula in Ghaemshahr to a family of farmers. She spent her childhood in an underprivileged family and worked in the harsh conditions of paddy fields. Ameneh always wished that one day she could do something so that the kind and hardworking villagers could live in peace and happiness. Her pure love for her people guided her to the path of resistance against the Iranian regime’s dictatorship. Hens, she joined other PMOI supporters and began her political activities against the mullahs’ regime. One day in high school, when everyone had gone to class, she picked a color bucket and wrote the following sentence on the wall:

“Poor defenders of the night, with knives in your hands, chanting against us, what will they do about the shining sun and the generation of faithful people who have sworn that tyranny will go? However they try to block the sun from coming out, but the sun, even when it is captivated, will remain shining …”

She hadn’t even finished her sentence, when one of the regime’s agents caught her writing on the wall. He moved close to Ameneh and said: “What is this that you are writing?” Amina said with a shrug: “Be a little patient while I finish my work, wait and see.” But the agent took Amina by her headscarf and slapped her in the face.

However, Ameneh was not afraid and did not move. She picked up the paint bucket and emptied the paint on his head.

It was with such high spirits that Ameneh continued her activities until Iran entered a stage of complete dictatorship and every glimpse of freedom was taken away from them.

Ameneh was arrested following the start of mass arrests in 30 June 1981. News of her arrest spread quickly in Ghaemshahr and surrounding villages. She was strong like a mountain vis-à-vis the torturers and resisted every moment in prison without showing weakness.

A hot summer afternoon, Ameneh was called to the regime’s co-called courts where her death sentence was announced to her. Ameneh was immediately executed.

Ameneh did not allow the regime to cover her eyes at the time of her execution.

She was thrown in a pit after being shot without giving her the coup de grace, and so she was left to suffer to death. She was buried in her hometown.

I think my heart was never

So warm and red

In the worst moments of the evening of my death

Flow with confidence from my heart.