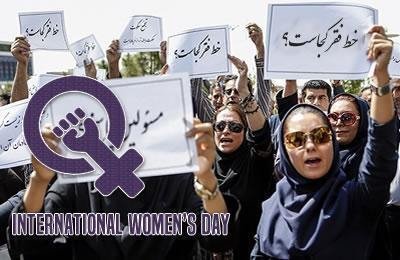 From the standpoint of the ruling regime and its dictated rules:

Women’s most important responsibility is homemaking and raising children.

Women cannot leave their homes or travel abroad without their husbands’ permission.

Women covering up is an essential principle which must be observed and safeguarded.

Women are not entitled to custody of their children.

Women’s main occupation should not be jobs and employment.

Women must not sing since their voice is “Satanic”.

Women must not enter sports stadiums since they are male environments.

Women must not defend themselves against rape otherwise they are executed.

Women are not trust worthy enough to be granted sensitive responsibilities.

Women are not qualified to serves as a judge or president.

A brief glance over women’s rights in today’s Iran, leads us to conclude that women are sub-humans who virtually do not have any rights in life; but what is the truth?

The truth is that Iranian women have stood up to the mullahs’ massive repression and have never surrendered to the misogynous regime.

Many died under torture, were executed by firing squads or kissed their hanging noose but did not budge and iota on the most important demand and needs of their nation, that is national sovereignty and democratic freedoms.

Many preferred to spend long years behind bars in the cold of dungeons and prison cells and go on hunger strike, forsaking their homes, families and loved ones. Others rose up everywhere in any factory, university and school to demand their rights.

Therefore, it could be rightly said that the most prominent distinction between the Iranian Resistance and the regime ruling Iran is on women’s issue.

Contrary to the misogynous laws of the clerical regime, the plan recognizes all rights of women as equal and independent human beings and provides them the opportunity to advance in education, science, society, economy and politics to the highest levels.

With the International Women’s Day approaching, the website of the NCRI Women’s Committee, will once again publish brief articles on the ten-point plan for women in tomorrow’s Iran to honor this great day and the status of Iranian women.

The Ten-Point Plan for Women in Tomorrow’s Free Iran

The constitution of the clerical regime has made gender equality contingent upon the criterion of “conformity with Islamic criteria” which allows any king of violation of women’s rights.

According to Article 20 of that constitution, “All citizens of the country, both men and women, equally enjoy the protection of the law and enjoy all human, political, economic, social, and cultural rights, in conformity with Islamic criteria.”

And Article 21 states, “The government must ensure the rights of women in all respects, in conformity with Islamic criteria.

” Since the ruling mullahs have a reactionary interpretation of Islam rendering it in effect a misogynistic religion, their views and laws are based on discrimination and suppression against women.

Article 115 of the constitution writes that the President must be elected from religious and political men.

The clerical regime’s Civil Law has explicitly rejected the rights of women in these respects, stating among other things:

Article 1105 – The family is headed by the husband and the woman may not leave home without the husband’s permission.

In the rules governing employment of judges, it has been written: “Judges must be chosen from among qualified men.”