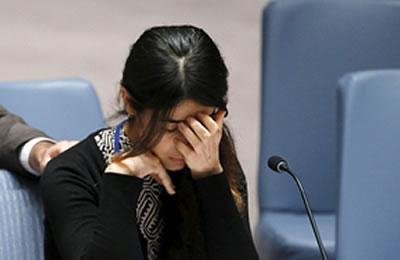 An ISIS sex slave survivor who was forced to watch her family be brutally murdered by jihadists before being taken into captivity has called for humanity to ‘unite’ against the terrorists.

Nadia Murad Basee Taha, 21, was orphaned when ISIS extremists slaughtered six of her brothers as well as her mother in the northern Iraqi town of Sinjar in August 2014.

She was among more than 5,000 Yazidi women taken captive when extremists swept through the town and was held in a building in the ISIS stronghold of Mosul where she was raped and tortured.

She managed to escape the clutches of the jihadists three months later and now lives in Germany, where she works closed with the United Nations (UN) to tell of her experiences.

‘A year and a half has passed and the genocide against the Yazidis is continuous. We die every day because we see the world silent in the face of our plight.

‘I was already orphaned as I didn’t have a father, all I had in the war was my mother.

‘But when they took me to Mosul and raped me, I forgot my mother and brothers. Because what they were doing to the women was more difficult than death.

Through tears, she said: ‘When I speak I don’t speak just on my behalf, but on behalf of all the women and children affected in the war zone.

‘At this moment, there are still 3,400 women in the hands of ISIS. All we are asking is that our women are freed.