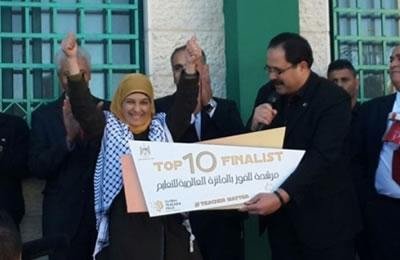 was chosen as one of the top ten to receive the annual award for the best teacher in the world.

Hanan had been a refugee in a camp close to Beit al-Lahm before transferring to Ram Allah to teach in a state school. She was chosen because of her successful initial in the school called “We play to learn”.

“I am happy because this dignity would raise the name of my country and that of me. However, I’m sad because of our children’s situation under the occupation as they suffer alongside every one step to the school” Al-Horoob said in a ceremony held in her honor by the Palestinian ministry of education.