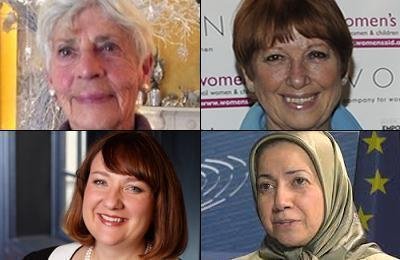 Prominent UK women’s rights activists: Women in the West urged to stand with their sisters in Iran

At an online conference on Friday, February 19, prominent women’s rights activists and lawyers from the United Kingdom discussed the appalling situation

for women in Iran and called on the UK government and international community not to stay silent in the face of state-sanctioned violence against women in the country.
The conference was moderated by Ms. Dowlat Nowrouzi, the UK Representative of the National Council of Resistance of Iran (NCRI) with Ms. Linda Lee, former President of the Law Society of England & Wales, Lady Val Corbett, prominent women’s rights activist, and Ms. Margaret Owen OBE, the director of Widows for Peace through Democracy, a UN Consultant NGO.
In their remarks, the speakers condemned the Iranian regime’s appalling treatment of women and pointing out they lack minimum protection and are being denied their fundamental rights including the right to choose their clothing.
The Iranian regime’s President Hassan “Rouhani is depicted as liberal, but it is the Supreme Leader Khamenei who is pulling the strings”, Lady Corbett said, adding, “Since Rouhani came to power, the Iranian parliament has passed a legislation to protect those attacking women with acid under the pretext of combatting ‘mal-veiling’. Rouhani will not change the women’s rights situation in Iran; it would be naïve to think that.”
Highlighting the systematic persecution of dissidents and women, Lady Corbett said, “30% of the 120,000 executed by this regime during the last three decades are women. The world forgets about the Iranian regime and the appalling treatment of women. In Iran, today, women do not have the choice of dressing as they want but are forced to follow a strict dress code, which has nothing to do with the real Islam.”
Margaret Owen agreeing with Lady Corbett’s remarks added, “The terrible violence against women and youths in Iran is sickening. The Iranian regime is against religion because thugs that attack women with acid are not punished. This regime executes juveniles and forces girls at the age of nine into marrying older men. At least 73 juveniles have been executed during the last decade, and according to Amnesty International, 160 are now on death row. Iran has signed up to the conventions on children rights but they do not care.”
Linda Lee, the former President of the Law Society of England & Wales, said: “The laws in Iran are not just, especially those laws against the women. We must work through government and use our right at the UN to force the Tehran regime to change its appalling behavior. This complete silence is shameful.”
Speaking about other major concerns with regards to Iran’s regime, Lady Corbett criticized the UK government’s weak stance on Tehran and its refusal to recognize the Iranian Resistance as disgraceful.
“Sanctions against Iran are being lifted following the nuclear deal, and everybody now is cozying up to Iran because the focus in on the ISIS. In the meanwhile, Iran is arming many terrorist groups in the Middle East,” she said.
In this regard, Ms. Owen said: “Recently, I took part at a rally with Iranians and supporters of the NCRI outside the Queen Elizabeth II Conference Centre in London to protest against the Iranian regime’s foreign minister Javad Zarif attending the Syria Donor Conference. He represents a regime that is taking part in the massacre of the Syrian civilians and is very much at the center of the problem. Why was he invited to that conference?”
Ms. Owen also highlighted the deadly attacks by the regime on members of the main Iranian opposition movement People’s Mojahedin (PMOI/MEK) in Camp Liberty and Camp Ashraf during the past years and said, “No one has yet been held accountable for these attacks. No one knows what happened to the Ashraf hostages, and our government did not ask what happened … Any one opposing the regime is treated appallingly, Iran under the rule of the mullahs is a pariah state, and we must name and shame the leaders and impose punitive measures and travel bans on them.”
The speakers also praised the brave Iranian women for challenging the regime’s misogyny with great personal sacrifices. They pointed out that there is a huge potential among women for change in Iran. They admired the incredible work done by women in the Iranian Resistance, the NCRI, and expressed their admiration for Mrs. Maryam Rajavi in leading the years of struggle against the Iranian regime.
“The change will come from women; punitive sanctions are a way to push for change but women are the true power for change in Iran. As we approach International Women’s Day, I urge the younger women in the West to get involved and stand with their sisters in Iran and spread their cause in social media,” Ms. Lee said.
Lady Corbett reminded the conference viewers that her late husband Lord Corbett of Castle Vale championed the cause of freedom and democracy in Iran during the many years in which he chaired the British Parliamentary Committee for Iran Freedom. She said that a website had been set up in his memory which also highlighted his support for the PMOI members now in Camp Liberty: Robin Corbett Award.

Dowlat Nowrouzi of the NCRI concluded: “The regime ruling Iran justifies its brutal suppression of women through so called Islamic laws and culture, which has nothing to do with the essence of Islam and Iranian people’s culture as one of the world’s oldest civilizations. These laws are also in clear violation of international law. These are medieval ideas pursued by the misogynist mullahs and forced on women and girls through various repressive armed forces affiliated with IRGC (Revolutionary Guards). The international community, UK, EU, US and UN must impose punitive actions including sanctions on the ruling religious dictatorship to effectively pressure the regime to stop executions; to abolish these inhumane so called ‘Islamic laws’ and comply with international laws and conventions; and to make upgrading political and economic relations of the western governments contingent upon major improvement of the human rights situation in Iran.’
The online conference was broadcast live on the website of the NCRI Foreign Affairs Committee and tweeted live with the hashtags #IranFreedom and #IWD2016.