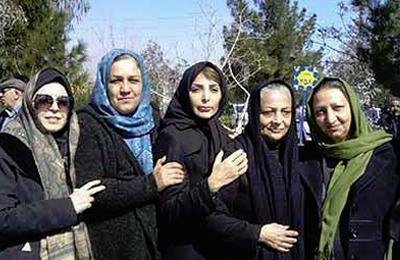 A number of mothers of martyrs and political prisoners gathered to commemorate the 40th day of passing of the mother of Shahram Farajzadeh, victim of the regime’s killings in 2009.

After the ceremony, Sholeh Pakravan, mother of Reyhaneh Jabbari, the young interior designer who was executed last year for defending herself against rape by an Intelligence official, posted a brief note on her Facebook account, declaring her refusal to participate in the Iranian regime’s sham elections. Her post read in part:

“On our way back from the memorial, we saw the posters of the candidates on the walls. I would not participate in destruction of the next generation of my country, even if my share is as little as a single vote….

“Many people still remember the records of these men whose polished pictures are on the walls. Who will ever forget the role of Fallahian, Reyshahri and others in the affair that ended up in Saeed Zeinali and six other students’ missing that year? (i.e. July 1999 attack on the students’ dormitory at Tehran University).

Who can forget those who were slain and drenched in blood in 2009?

Who can turn a blind eye on 2000 executions in one year?

Who can forget Reyhaneh, my little girl who became the daughter of numerous honorable men and women of Iran?”

“This is why I won’t vote. I will never vote for those whose hands are stained with the blood of our youths. Voting in these circumstances has only one meaning, that the voter approves of the crimes of the criminals and turns a blind eye to the murder of our fallen youths.

Let’s not forget that just a few days ago, Molaverdi spoke about a village that all its men had been executed. Although, she didn’t speak about conditions of their survivors. What do the wives and mothers and daughters of the executed men do? What has the government done for them? Who knows, may be some time later, the government announces that all the residents of this village (in the absence of their men) turned to prostitution!! What a shame! Shame on the inhuman authorities who make such decisions.”