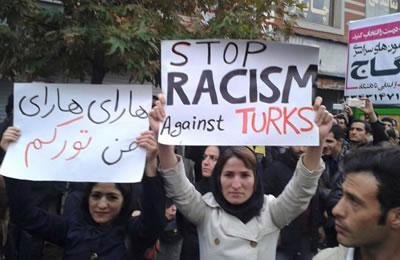 Iran-women: Turks sentenced to jail and flogging for protesting insults

A court in north-western Iranian city of Tabriz sentenced the protesters against a TV program insulting the Turks, to prison and flogging.

Turkish activists staged a rally last November in protest to a TV program insulting the Turkish people. Many people including the 23 convicts were among those arrested by the security forces.

The judge condemned them to one year suspended jail term and 74 lashes on the charge of “disrupting public order by participating in illegal gathering”.

Three women, Sahar Tirandaz, Hediyeh Fathi and Soraya Azarhawa are amongst the convicts.

Why the Iranian regime does not join the CEDAW?