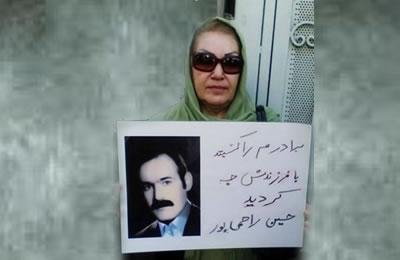 Raheleh Rahemipour is the aunt of a newborn baby who has been missing since 1984 in Evin Prison. She has been following up on the fate of her niece, Golrou, during all these years. If alive, she must be almost 32.

The family has filed a complaint with the UN Working Group on Forcible Disappearances to determine her fate.

Golrou’s mother, a former political prisoner of the 1980s, spent months in solitary confinement despite being pregnant. A few days after delivering her baby, she was transferred to a public ward. They separated the baby on the pretext of medical checkup while the baby was completely healthy. The next day, they told the mother that her baby had died without presenting any document or the baby’s body. The father was executed in less than six month after this incident and the mother suffered severe heart problems.

The aunt, Raheleh Rahemipoor who has been following up on her niece over all these years, holds up a placard in any occasion which reads, “You killed my brother. What have you done with his child?”

The authorities told Rahemipour family, “Why do you look for the baby? Do you want her to become someone like her father?”

“The humiliating sentence, ‘you do not deserve raising a child’, was repeatedly said to the imprisoned mothers”, another political prisoner of the 1980s said.