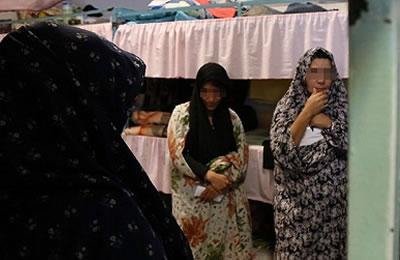 A former political prisoner shared her one-year-experiences from Yazd Prison after being released. She said:

The prison’s hygiene was very bad. Just recently, lice had spread all over one of the wards.

They gave sheets only to those who had beds. So, two-thirds of the prisoners who slept on the floor did not have any sheets. Blankets were also really filthy and the prisoners had to wash them, themselves, while there was no place for drying them.

Our ward had six three-tier bunk beds, so 18 people had beds. The middle bed was so tight that you could not sit on your knees. The upper bed was too hard to climb. The lower floor was the dirtiest.

There were 40 prisoners in the ward and except for the 18 who had beds, the others had to sleep on the floor of this 14-meter room. Some had to sleep in the corridor, in the kitchen and in front of the bathroom.

There were four showers and four toilets for 150 people. Usually one or two of the toilets were broken. Water leaked from the taps.

The kitchen was always the place for conflicts. Two 3-flame stoves were in the kitchen for 150 people to cook their food using the things they could buy from the prison’s store.

People stored everything they had in a plastic basket and shoved them under the beds which was not very clean.

The prison’s store was a rat-ridden trailer located in the corner of the prison yard. All the knitting yarns we bought from the store had been chewed in the middle. Everything was very expensive in the store, several times the ordinary price. So, the prisoners who did not have financial support from outside were not able to buy even their shampoo.

In another ward, most prisoners were mothers or pregnant. Some had delivered their children inside prison. The mothers’ ward was a 12-meter cell where 10 to 15 mothers lived with their children. Their toilet and bathroom was located in the same place. There was no place for children to play and they were taken to the same yard where other prisoners with their different backgrounds and moral issues were taken for break.

Family visits also took place under much stress and in rush. You had to wait for your turn to pick up the handset and talk, but either the voice got cut off or the phone itself. And when you wanted to start talking, your time was up.”