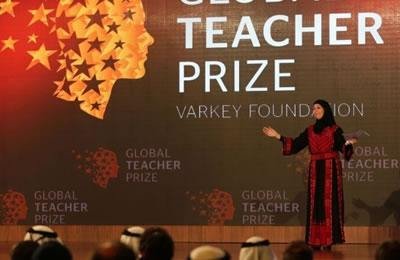 Associated Press, DUBAI, March 13, 2016— A Palestinian primary school teacher who grew up in a refugee camp and educates her students about non-violence won a $1 million prize for teaching excellence on Sunday, beating out 8,000 other applicants from around the world.

Hanan al-Hroub, a primary school teacher in the West Bank city of al-Bireh just outside Ramallah, was awarded the second annual Global Teacher Prize during a ceremony in the city of Dubai, United Arab Emirates.

Dubai ruler Sheikh Mohammed bin Rashid Al Maktoum was on-hand to present the prize to al-Hroub, however her name was announced by Pope Francis in a video message after he talked about the importance of education and teachers, especially for children who grow up amid war.

“I feel amazing and I still can’t believe that the Pope said my name,” al-Hroub told The Associated Press. “For an Arab, Palestinian teacher to talk to the world today and to reach the highest peak in teaching could be an example for teachers around the world.”

She told The Associated Press that she will use the million-dollar prize money to create scholarships for students who excel in order to encourage them to choose careers in teaching.

As al-Hroub accepted her award, Palestinians in the audience waved their country’s flag and some chanted, fists pumping in the air, “With our souls, our blood, we sacrifice for you Palestine.”

In her acceptance speech, she reiterated her mantra of “No to violence” and stressed the importance of dialogue.

“The Palestinian teacher can talk to the world now. Hand in hand we can affect change and provide a safe education to provide peace,” she told the AP.

Al-Hroub was among 10 finalists flown to Dubai to attend the ceremony. The nine other finalists hail from Australia, Finland, India, Japan, Kenya, Pakistan, Britain and two from the United States. Al-Hroub had them stand on stage with her to roaring applause after her speech.

The Global Teacher Prize was established two years ago to recognize one exceptional teacher who has made an outstanding contribution to the profession, employs innovative classroom practices and encourages others to join the teaching profession.

The award is presented by the Varkey Foundation. Its founder, Sunny Varkey, established the for-profit GEMS Education company, which has more than 130 schools around the world.

Al-Hroub’s official biography says she grew up in a Palestinian refugee camp in Bethlehem, where violence was a regular occurrence. Her biography says she went into teaching after her children witnessed a shooting on their way home from school. That experience pushed her to think more about traumatized children and how classrooms can help. She developed a book called “We Play and Learn” focusing on the importance of playing, trust, respect, honesty and literacy.