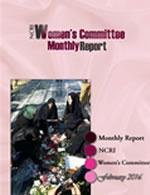 The month of February in Iran was marked by mounting pressure on female prisoners and increasing restrictions on their medical services.

At the same time, the government stepped up its crackdown to impose mandatory hijab and other restrictions on women’s clothing. The “Moral” Police was widely present in streets – and even during Tehran’s film festival.

One of the most important developments in February was the publication of a report by the U.N. Committee on the Rights of the Child. The U.N. committee cited in its report that Iran continues to execute children and youth who committed a crime while under 18 years of age, in violation of international standards, after its 18 independent experts reviewed Iran and 13 other countries. The committee also called on the Iranian regime to reform its laws that allow girls as young as nine to be executed for crimes or forced into sexual relations with older husbands.

Girls suffer discrimination in the family, in the criminal justice system, in property rights, and elsewhere, while a legal obligation for girls to be subject to male guardianship is “incompatible” with Tehran’s treaty obligations, the panel said.

Pressure continued on women in detention, depriving them of receiving their needed minimum medical care in prison. Sofiyeh Sadeghi and Zeinab Jalalian are among such prisoners.

Despite suffering from kidney and heart problems, Sadeghi has not received permission to exit prison on medical leave. She is 26 years old and is in prison on a 15-year sentence.

Another case is Zeinab Jalalian’s. She suffers from visionary and intestinal complications and is in danger of becoming blind in both eyes but the Public Prosecutor of the city of Khoy has rejected her request to receive medical care out of prison.

Jalalian’s lawyer said Zeinab is deprived of leaving prison because she has not accepted to make false confessions in a TV interview on charges raised against her.

Qadriyeh Qaderi, a Kurdish political prisoner, was also deprived of family visits and medical leave simply for refusing to memorize verses of the Quran.

Civil activist Narges Mohammadi has been deprived of having any contacts with her children. Despite 27 inmates, the women’s ward of political prisoners and prisoners of conscience in Evin Prison, is the only ward where prisoners have no means of calling their families.

Women were mostly arrested during protest rallies in the month of February. A number of women were arrested by security forces on February 12 during a rally protesting the continuing detention of Mohammad Ali Taheri, the leader of the ‘Erfan Halgheh’ religious minority group. Firouzeh Ranjbar, Maryam Davoudi Omid, Dr. Elahi and Zahra Shafi’i were among those arrested.

Abuse of basic freedoms and rights

More repressive plans were adopted in the month of February to impose the mandatory dress code on women and ban their equal participation in social activities.

A deputy interior minister emphasized that administrative offices have been instructed to observe gender segregation in the work place, and the plan has been carried out in many government offices and the private sector.

Ghazipour, a member of the Iranian regime’s parliament, emphasized on women’s duty to be housewives.

“The responsibility of raising children is mostly on women’s shoulders! If women go to work, who will raise the kids?” he asked.

Furthermore, the Moral Patrols were present during the second day of a film festival in Tehran held at the famous Milad Tower, controlling women’s outfits and arresting women for improper veiling.

The state-run media reported on women being deprived of equal job opportunities and their increasing unemployment.

“Currently, unemployment among women is more than twice that of men,” the state-run ILNA news agency wrote on February 7.

“Women’s unemployment has reached 40%. 80% of women in Iran are housewives,” the state-run ISNA news agency reported on February 13.

In the month of February there were more reports on women committing suicide. In a shocking example, a 26-year-old pregnant woman set herself ablaze and lost her life due to increasing pressures on her. A young girl in a village near Kermanshah, western Iran, was reported to have committed suicide with a hunting rifle.

Women’s protests and gatherings continued in the month of February.

On February 11, a group of mothers of martyrs and political prisoners held a protest rally in Tehran to express their support for

Simin Aivaz-zadeh, the mother of former political prisoner Omid Ali-Shenas, and Hashem Zeinali, the father of missing student since 1999 Saeed Zeinali, both of whom had been summoned to court.

His family, the mothers, and Dr. Mohammad Malaki, the first Tehran University dean after the 1979 revolution and now a dissident activist, participated.

The mothers of prisoners and martyrs of the 2009 uprisings expressed their sympathy with Mohammad Mokhtari’s family and pledged their perseverance to the very end. Mohammad Mokhtari was born on September 10, 1989, and lost his life during a 2010 popular uprising as security agents opened fire on protesters.