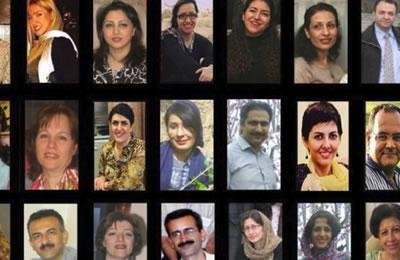 Twelve Baha’ii citizens arrested in October 2012 in the Northern Province of Golestan were tortured by the Intelligence Ministry’s agents. They were arrested mostly without any justification and were informed of their charges by their interrogators after many days.

They were charged with “advocating Baha’ism and propaganda against the state through membership in illegal Baha’ii organizations” and “collaborating with enemy states by effective support and activities to advance the sectarian, anti-Islamic and anti-Shiite goals of arrogant and hostile governments.”

In a letter to the mullahs’ head of judiciary they described their conditions as the following:

“Ms. Hana Aqiqian was forced to go under a small table where only half of her body could fit. Then they kicked her in the sides and other parts of her body. They said, ‘If you do not answer our questions the way we want, we would hand you over to interrogators who have other methods for interrogation.’ They finally tore up the interrogation paper and forced it into her mouth.

“They would beat up the prisoner, if they did not receive the answer they sought. If the interrogator did not like the prisoner’s answers he sent her to solitary confinement.

“The cell’s temperature had been turned down so much that prisoners felt pain all over their bodies. As to why they did so, they said, ‘You did not cooperate, now you have to cope with the cold.’ The cell’s lamp was on round the clock.

“Interrogators tried to put more pressure on prisoners by fabricating moral allegations. They said, ‘You have used your wife or daughter to attract other men.’ Once an interrogator got too close to a female prisoner, pushing her against the wall, and making verbal threats.”