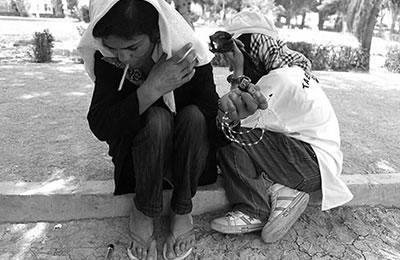 The NCRI Women’s Committee had already warned about the horrible conditions of Tehran’s Shafaq rehabilitation camp for addicted women citing city officials and news reports from inside Iran.

Hard evidence emerged on April 4, 2016, in a report published by the state-run Hedana website.

According to this latest report, women who have left Shafaq after three or five months of “rehabilitation” have made shocking revelations about the plight of women in the camp.  Among others, they have complained about the camp’s poor hygiene, physical punishment, and shortage of food and medicine which have made their situation worse rather than better. They said they were given a small piece of cheese every day and their meals did not contain any meat or eggs in months. They were allowed only three minutes every two weeks to have a bath and were subsequently removed by force out of the shower by men.

Two of these women testified that two women had been murdered in the camp.

Nassrin who was released from the camp just last week, said, “Somayeh and Azar starved to death. Many things have happened in Shafaq that couldn’t be said!”

While confirming the two deaths, Goli has a different story. She says, “I hate Shafaq. Somayeh was given 30 grams for pure methadone, so she overdosed.” As for Azar, she says, “They kicked her in her appendix. Her appendix burst and she did not wake up in the morning.”

Another woman points out that women were sexually abused in the camp. “We had to beg to obtain sanitary stuff. Some people did anything to get a pack of cigarette… You know what I mean? Well, when men are in a women’s environment these things happen!”

According to Hedana, the authorities have not allowed the press and reporters have access to the camp.

Iran: Woman killed for activities on the Internet