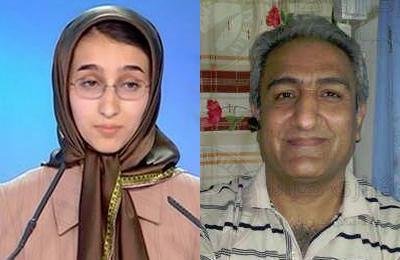 Pariya fled Iran last year along with her uncle Farzad Madadzadeh and joined the main Iranian opposition movement the PMOI in France.

Mr. Bayemani wrote in his letter:

I look at the outside world from behind the cold metal bars of prison. But I can feel with every cell in my body how much your efforts are nearing victory. I congratulate the New Year to you and Farzad, and all your friends.

You would probably wonder why I am writing you this letter after such a long time.

The truth is that today was the start of the second week of the new (Iranian) year. It was the same time last year, when you came to visit your father but they did not allow you to have an “in-person” visit whereas all other political prisoners were allowed “in-person” visits during that week. The only exception was you!

I saw you laughing with your Dad, and you were both so excited when looking at each other. You were paying no attention to anything around you, as if you were in each other’s arms.

After the visit, when we were returning with your Dad from the cabins’ hall, I felt he was upset. I told him I was very sad that they didn’t give you and Pariya an “in-person” visit.

With a smile that was always on his face, he recited a poem and said: “They just cannot understand how they cannot stop us.”

Today, you no longer have to see such painful scenes but when your father returned from a visit, he had that same smile. This time not because they had not allowed her daughter to have an “in-person” visit. No! This time, it was your 70-year-old grandfather who had come here with all the hardship, to visit your Dad for a few minutes.

Last year’s scenes were repeated all over again.

Everyone was granted “in-person” visits, but not this 70-year-old man…!