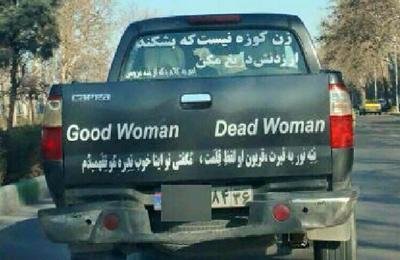 Women are not breakable, don’t lose any chance to beat them up

These are the writings on the back of the car pictured here in this news.

An Iranian regime’s operative has written these misogynist remarks on his car to publicly promote violence against women.
Such pervert outlook is rooted in the medieval vision of the Iranian mullah regime that has institutionalized misogyny in its laws and in society and promotes acid attacks on women and their beating under various pretexts including improper veiling.