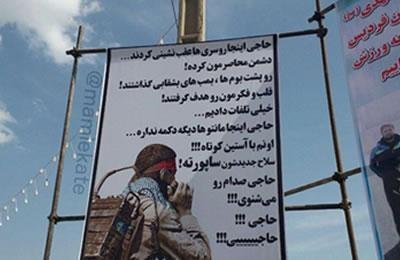 A picture has been circulating in recent days on the internet which indicates the Iranian regime’s desperate efforts to impose mandatory veil on the women of Iran. At the same time, it reveals the misogynous nature of the mullahs’ vision.

The photo shows a billboard in an Iranian street bearing the picture of a soldier at the warfront and his conversation with his commander reporting the coordinates of the enemy – women who refuse to observe the compulsory dress code!! Excerpts of this conversation:

We have been surrounded by the enemy…

They have targeted our hearts and minds

We have suffered a lot of casualties

Here, coats no longer have buttons

The sleeves are short

Their new weapon are tight pants…