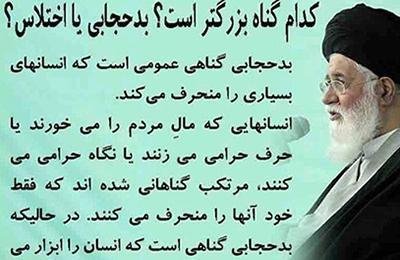 He downplayed the extensive damages caused by enormous amounts of wealth embezzled by various government and regime officials and their affiliates and subsequent destitution of the general public. Alamol-Hoda restricted the damages to the criminals themselves and explained, “When a man embezzles people’s wealth, or says something unlawful, or looks lustfully at someone, he commits a sin but the damage is restricted to himself. Whereas mal-veiling is a sin that turns people into tools for the Satan and mislead others.”