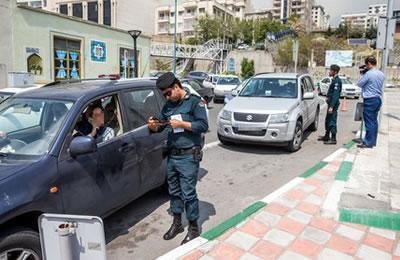 Another stage of the activities of Moral Security patrols began in the Iranian capital on Saturday morning, April 16, 2016.

The police and the State Security forces are going to deal with individuals who fail to observe the government’s mandatory dress code, and women who drop their veils while driving, etc.

The Moral Security patrols are stationed with their vehicles or motorcycles in front of shopping malls and centers, main squares, also on highways and high-traffic avenues to monitor and deal with mal-veiling, non-veiling inside cars, drivers who play loud music in their cars, walking dogs (!!), etc.

Eyewitnesses said police agents impounded a number of cars whose drivers had dropped their veils while driving. Others received warnings.

In addition to the police and the State Security Force, 26 different agencies in Iran are tasked with controlling women’s veiling.