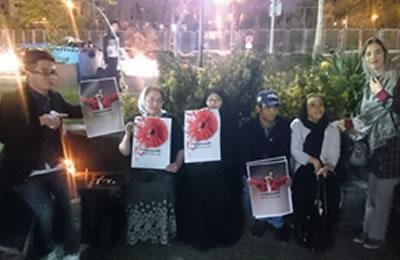 who planned to picket across from the Embassy of Afghanistan on Monday, April 18, 2016, to express their sympathy with the family of the six-year-old Afghan girl killed last week in Varamin, Iran.

“They were more violent towards Afghans. They attacked some people by batons and arrested 10 to 15 men,” an eyewitness said.

According to other eyewitnesses, all the streets leading to the embassy were blocked and people, especially Afghans, were not allowed to pass. The metro station was closed for some hours. Police used teargas to disperse the crowd and filmed the participants for subsequent harassment.

Nevertheless, some people went to a nearby park and lit up candles next to the photos of the little Setayesh to commemorate her, as displayed by video clips disseminated on the internet.

Setayesh Ghoreishi, aged 6, was an Afghan girl who disappeared on April 10 in the city of Varamin. Her burnt body was found the next day in a neighbor’s house. The neighbors’ 17-year-old teenager son is accused of raping the girl and subsequently killing and burning her with acid.

The vicious rape and murder has been a great shock to the public.