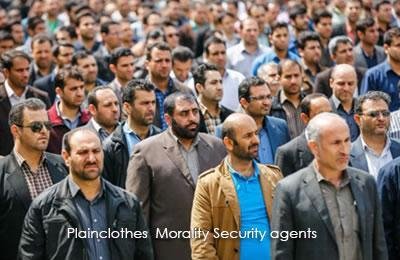 As many as 7,000 agents in the Iranian capital will be targeting women with ‘bad hijab’, but a new police-spotting app may give fashion rebels the edge

Police in Tehran are deploying 7,000 undercover morality agents tasked with a fresh crackdown on women defying strict rules on the wearing of the hijab, among other offences deemed un-Islamic.

Every spring, as the temperature rises and with it the desire of people to go out, the authorities in Iran tighten their grip on social norms, increasing the number of the so-called morality police deployed in public places.

They target anything from loose-fitting headscarves, tight overcoats, shortened trousers for women, and glamorous hairstyles to necklaces for men. Walking dogs has also been added to the long list of activities that upset the authorities.

It is not clear if the announcement is a response to the recent launch of the Android smartphone app Gershad, which enables users in Iran to circumvent the morality police vans based on information about their locations collected by other users.

Tehran’s police chief, Hossein Sajedinia, who was speaking to reporters on the sidelines of the ceremony for unveiling the new plainclothes units, said forces had been stationed in public squares, streets and shopping malls.

Sajedinia said “confronting bad hijab and removal of veils inside cars, driving recklessly, parading in the streets, harassing women and stopping noise pollution are the priorities”, according to AFP.

The new recruits will not confront people directly, local news agencies said, but instead will send number plates to their superiors who will then officially summon them to see the police. Culprits will be prevented from selling their cars if they do not report to police after receiving a notice.

An Iranian environmentalist and journalist tweeted: “In the whole country, we only have 2,600 conservationists protecting the environment, while in Tehran alone 7,000 people have been hired to police people’s hijab.”

Obligatory wearing of the hijab has been an integral policy of the Islamic republic ever since the 1979 revolution but it is one the establishment has had a great deal of difficulty enforcing. Despite fear of reprisals, millions of Iranian women, defy the restrictions on a daily basis by pushing at the boundaries.

Iranian leaders, however, intend to insist on the issue, even though the way people dress reveals where many Iranians stand.

While wearing the traditional chador, which covers women from head to toe, was the norm in the initial years after the revolution, most women are now wearing the Iranian-style manteau, a jacket worn below the knees, and a looser-fitting headscarf.

Observers in Tehran say an increasing number of women do not wear headscarves while driving and the latest fashions include manteaus without buttons on the front.

Diplomats and foreign dignitaries are not exempted from the regulations. In a recent incident, the female foreign minister of India, Sushma Swaraj, came under huge attack online this week for covering her head during a meeting with the Iranian president, Hassan Rouhani.

Earlier in April, Air France, which recently resumed flights to Tehran after an eight-year hiatus, said its female cabin crew can refuse flights to Iran after protests by a number of the crew members over the compulsory hijab.