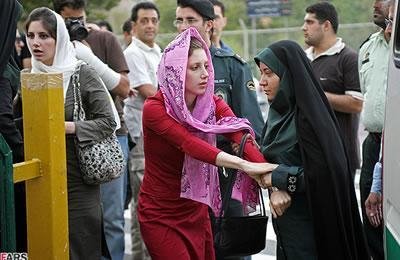 Officials in Iran have said this week they had a network of 7,000 undercover agents who inform police

about moral transgressions – like women who don’t cover their hair properly.

Women are also increasingly blocked from education opportunities and employment, Elham Zanjani of the National Council of Resistance of Iran’s Women’s Committee said.

“They call Rouhani a moderate or a reformist. This is a total myth,” Ms. Zanjani told DW radio. She pointed out that the mullahs’ regime relies on misogyny; there is no way that women will have progress and equal rights.
“Definitely, the situation of women has worsened since Rouhani took over.”
“In the document that we published, there is a report from the Iranian state-run news agency IRNA where it states that from years before – for example from 2005 going on to 2010 and then until when Rouhani took over – the situation of women’s university admission and the situation of women’s rights in education has deteriorated.”
Rouhani has had very high responsibilities within the regime from its founding days, she said. He is a very strong believer in the principle of ‘Velayat-e Faqih,’ or absolute clerical rule, she argued.

Over 60 percent of university students in Iran are women however they are forbidden from studying in at least 77 fields only on the basis of their gender, she pointed out.
Ms. Zanjani reiterated that when European Union foreign policy chief Federica Mogherini and other EU officials go to Iran and the “issue of human rights, particularly women’s rights, is not the first issue on the table, things will not improve for women in Iran.”