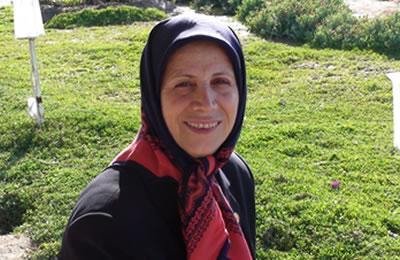 I was a nurse, working night shifts in a hospital. One morning, as I was returning home, I was stopped by a horrific scene.

In Imam Hossein Square in Tehran, a 17-year-old boy had been hanged in public. I arrived at the scene when his body was swinging in the air and his legs making sudden movements.  People were watching in awe.  No one was even breathing. The terror was indescribable.

The dreadful spectacle of the tiny legs of a young boy twirling and seeing him struggling while suffocating, changed my whole life. I made a choice to fight against the brutal dictatorship ruling my country.

When I was leaving the country, I was not able to bring my 9-year-old son.  Leaving him behind was one of the toughest moments of my life. He was weeping so baad that everyone in the airport was crying with him. I said good bye to my son, held the hand of my older daughter and stepped forward.

I knew if I turned back to look at him, my motherly instincts would prevail. On the way to the plane, I tried not to think about anything but the future and the road ahead.

While I was walking, holding my daughter’s hand, she asked me: “Won’t you wave to Mohammad-Reza?”

I replied, “There are things that you don’t understand…” and continued walking.

When we finally got seated in the plane, I could no longer hold my emotions and burst into tears.

During those hard moments, I tried to ease the pain of leaving my child behind, with the memory of the mothers who had lost their children on the nooses or before the fire squads, or those whose children were buried in mass graves and were never informed of their whereabouts.

I tried to tie my tears to those of all the mothers all over Iran and draw my strength from them, a bond that has nested the love and affection for thousands of little boys like my own Mohamad-Reza in my heart, and has never left me.