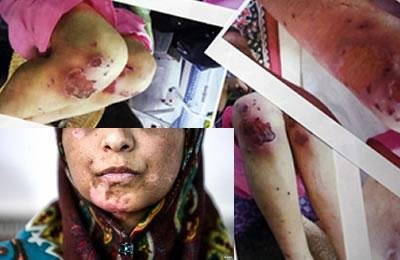 A horrible case of violence against women in Mashhad went unheeded by an MP in the northeastern province of Khorassan Razavi.

A woman and her two daughters were incarcerated at home and viciously tortured by her addicted husband for 21 days without any food or water.

When asked to comment about the incident, Majlis deputy Hashem Bani Hashemi said, “I am not informed of the details of this issue. I read about it in the press but I cannot comment on the details.”

As to why he did not follow up on this case as the city’s representative, he responded, “The news published in the media are not limited to just one or two cases; there are hundreds of these incidents and the judiciary and the State Security Force are the authorities in charge of following up on these kinds of incidents.” (State-run ILNA news agency – April 23, 2016)

According to a report by the state-run ISNA news agency, a 30-year-old woman called Azam and her two daughters, 8 and 5 years old, were tortured for 21 days by her husband. During this period, they were deprived of eating and drinking.

Earlier, Azam’s husband had broken her nose and tore up her rectum with knife. He confessed that he had intended to kill his wife and children, throw them into the well and burn them.

Nevertheless, the misogynous regime’s court has set an easy bail of only 20million toumans (approx. $5700) for his freedom.

There are no punishments for violence against women under the laws in Iran.