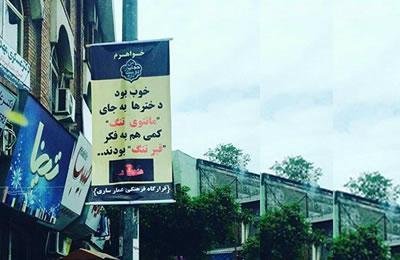 In its desperate efforts to counter the extensive wave of women’s rebellion against compulsory veil and widespread public aversion to the clerical regime’s official methods of imposing and enforcing it,

the government acts through various agencies to wage a cultural campaign in step with the activities of its Moral Security Police and its plainclothes agents.

The cultural campaign is waged by posting huge banners and billboards promoting “the veil”.

The accompanying picture shows a big banner hoisted in the city center of Sari, the capital of Mazandaran Province, northern Iran. It says: “It would have been good if girls would have thought of the tight graves instead of thinking of tight manteaux.”

Another billboard in the Holy city of Qom, posted by the Assembly of Followers of Promoting Virtue and Prohibiting Vice, states: “How could we have emigrant manteaux-wearing women residing in Qom understand that their tight, short and split manteaux incite young men and do not let them maintain their mental and spiritual calm?”