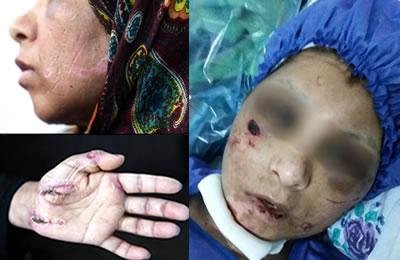 Azam, the woman who was tortured 21 days by her husband, was transferred along with her two daughters to a government welfare center where women and girls who have suffered social damages are kept.

The Welfare Organization’s social affairs deputy in the Khrassan Razavi Province said the two daughters of Azam will stay with their mother in this center until they reach a better psychological condition. Then, they are going to be transferred to children’s house where they can stay, permanently if they want.

Azam, however, will not be permitted to stay in such centers, permanently.

This is while Azam’s husband who had tortured her to the verge of death is able to get released easily on a petty 20million-touman bail (approx. $5700) and hurt her again.

This incident is a vivid testimony to the lack of social protection for vulnerable women in Iran and the absence of any laws to punish perpetrators of violence against women.