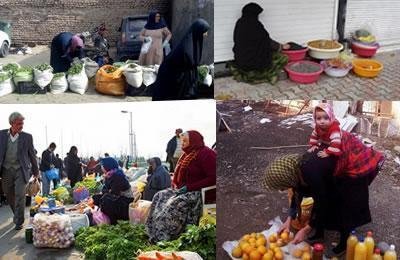 “Peddling may have an annoying face but the problem could not be solved by erasing the issue by force. Today, the issue of ‘female peddlers’ is an undeniable reality in the Iranian job market.”

The sentences are parts of the introduction to an article published by the state-run ILNA news agency on April 27, 2016. The article reflects parts of the suffering of unemployed women under the mullahs’ rule. Excerpts are as follows:

Late last winter, the municipality decided to erase this ugly problem. Municipality agents confronted more and more female peddlers in the subway train stations for days. Male and female agents were deployed to violently confront the women, confiscate their belongings and detain them for a few hours…

Khadijeh, 32, comes from Kermanshah. It is 12 years that she has to earn her family’s living. “My husband used to be a worker but now, he suffers from bone phthisic and has been disabled. I have two 10 and 4 year-old children. The expenses for my husband’s treatment are also high,” said Khadijeh.

Khadijeh and her family do not have any insurance and receive no social welfare aid.

Parigol, 63, sells with a broken shoulder. Her husband used to sell cigarettes but now he is a dialysis patient with heavy medical costs. He has to pay monthly dues for his insurance. Now, that he is unemployed and stuck at home, Khadijeh has to pay his 250,000-touman monthly payment to the social security.

“My shoulder was broken a long time ago, but I had neither the time nor the money for physiotherapy. I also suffer from arthritis and osteoporosis. My son used to be a wrestler but he was hurt in an accident,” Parigol added.

She has to earn the living for three people in addition to a 400,000-touman monthly rent for a residential unit in southern Tehran…

Mina is almost 30. She says, “I was forced to get a divorce. To obtain my children’s custody, I had registered a house I had inherited under my ex-husband name. In January they arrested me and confiscated everything I had.” Mina has been arrested several times, for a few hours each time.

These problems are rooted before everything else in the double-rate of women’s unemployment and lack of opportunity in finding jobs. According to the latest figures published by the National Statistics Center, the rate of unemployment among 15-24 year-old youths is 26.1% percent. Men’s share is 22.3% while women’s is 42.3%.

In conclusion, it is striking how the principles of law have been forgotten. Section 2 of Article 43 of the Constitution says: “It is the government’s duty to provide and facilitate job opportunities for everyone so that they can have full employment.”