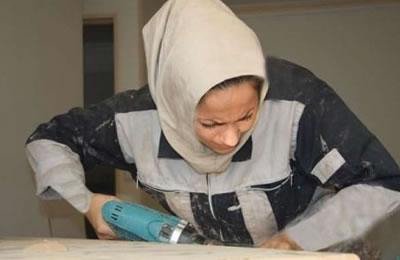 Document 111 published by the International Labor Organization (ILO) states:” Any prejudice in employment and any discrimination based on color, race, gender, religion and political opinion is forbidden.”

The Iranian regime blatantly ignores this clause.  Iranian female workers suffer by two-fold. The Iranian government openly discriminates against women in almost every field and also abuses them at the workplace.

Women are mainly hired as cheap labor. There is no equal opportunity for employment and men always have priority in employment over women, as shown by the statistics and numbers.

In 2015, 62% of participants in the university entrance exam were women and 38% were men.  However, the official statistics show 40% unemployment among young women. The average unemployment rate for women is 19.4% which is almost twice the unemployment of men (9%).  The same statistics show that the rate of women’s economic participation is only 13%, compared to that of 63% for men.

Among youths, the unemployment figure for young women is 40.2%, which is twice the number reported for men (19.1%).

Unlike developed countries, where gender equality is considered a yardstick of improvement and progress, in Iran, there is an inherent bias and misogyny in the society imposed and nurtured by the Iranian government. Vahideh Negin, the advisor in Rowhani’s cabinet, announced officially that ”half of Iranian women workers receive only one-third of their real wage.” (IRNA, 4.21.2015)

Some examples can shed more light on the situation:

IRNA News Agency (9.8.2015): “The economy is in a very difficult situation as a result of the lack of employment opportunities and an increase in unemployment. These conditions are harder for women. Right now for every 5.31 employed males, only one female is employed. “

Contrary to the trends observed in developed countries, rights and opportunities have been decreasing by day for Iranian women. In the latest report of the World Economic Forum, Iran was ranked 141 among 145 countries with regards to gender gap and equal opportunity.

In Germany, 800,000 out of 3 million small business owners are women. 12 giant companies in Germany have female CEOs. 55% of women and girls ages 15-60 are employed, which constitute 40% of the workforce in Germany.

In Sweden, two-thirds of university graduates are women. They are able to study in any program offered by the universities.  30% of companies are directed by women. 24% of the board members of these companies are women. According to the statistics published in 2015, 82 women are employed in prominent industrial positions alongside 90 male counterparts. In addition, 12 out of 24 cabinet ministers are women.

In Iran however; only one woman has employment opportunity compared to every 5.31 man. The rate of men’s economic participation is 62.5%, compared to 12% for women. The unemployment rate is 21.3% for men and 43.8% for women.

In Iran, women are discriminated against in every aspect of life whether social, cultural or political. The misogynistic laws imposed by the mullahs’ corrupt religious dictatorship, has blocked all avenues of advancement for women. Any action against these discriminative rules and laws are answered with brute force, expulsion from the workplace, physical abuse, long jail terms in inhumane conditions and even execution.