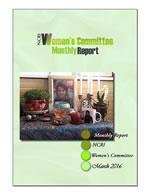 The month of March 2016 marked international women’s day celebrations as well as the beginning of the Persian New Year, ‘Norouz’.

A month in which pressures and crackdown against women during Norouz celebrations increased more than before. A report leaked out from Tehran’s notorious Evin Prison explained the deteriorating condition of women in prisons under the rule of the Iranian regime.

The circumstances of imprisoned women was a subject which Amnesty International referred to in a statement focusing on the situation of the detained artist, Atena Farghadani.

Flogging sentences and arrests based on charges for participation in civil activities were issued against women in the month of March. Also, a wave of arrests of religious minorities were carried out in this month.

The violation of women’s fundamental rights, depriving them of their occupation, increasing poverty, homelessness and being the target of acid attacks all continued this month. However, these pressures failed to silence the courageous women in Iran, especially on the eve of international women’s day, as women held ceremonies and demanded their rights to freedom in one of the most misogynist countries of the world.

Women and youth protesting insults aired on state TV were carried out at large. A court in Tabriz sentenced 23 individuals to a total of 23 years behind bars and 1,702 lashes, including Sahar Tirandaz, Laleh Zari, Hediyeh Fat’hi Rostami and Soraya Azar Hava. Also, Simin Aivaz-zadeh, a mother campaigning against her son’s detention, was sentenced to 91 days in prison and 74 lashes.

The Baha’i community was also the target of attacks and harsh court rulings in March.

There were reports of 24 Baha’is arrested in Golestan Province who were beaten in detention. Hana Aghighian, a female Baha’i, was forced by interrogators to go “under the table” as they kicked her in the sides and all over her body.

Simultaneous with the Iranian New Year, state agents beat relatives of prisoners who had protested their loved-ones detentions. According to an eyewitness, an agent slapped Atena Farghadani’s father in the face and “kicked and punched” another youth.

A report by Amnesty International in the month of March covered the harsh conditions imposed on women in prisons in Iran. In their report on the conditions of Atena Farghadani, an imprisoned artist, she was referred to as a prisoner of conscience who has not committed any crime and is only being punished for exercising her right to freedom of speech.

Moreover, there were reports on the conditions of Zeinab Jalalian, a young prisoner who is currently deprived of necessary medical care to treat her eyes and is facing the threat of losing her vision.

We also observed a new report of women’s conditions in Evin Prison, stating that imprisoned mothers were banned from having telephone calls to the outside world. The prisoners in this ward are also facing nutrition problems. Another issue is the high number of inmates in the women’s prison, forcing many of the women to sleep on the floor.

Iranian New Year celebrations and ceremonies in Kurdistan, western Iran were interrupted by security agents who arrested women. The agents attacked women taking part in Norouz rallies, arresting many in the village of Ghasrian. Two women arrested have been identified as Sara Mirania and Ladan Sohrabi. Agents were seen using batons and splashing acid to attack the women.

Another report that gained widespread coverage in the media was the arrest of a former French embassy employee in Tehran by the name of Nazok Afshar. She was arrested on March 12, 2016 upon entering Iran and immediately transferred to Evin Prison.

As every country was celebrating the achievements of women, poverty, selling babies, acid attacks and child brides were amongst the main violations of women’s fundamental rights in Iran in the month of March. State news agencies referred to more women plunging into poverty by referring to an example from Hormozgan Province (southern Iran). Of 57,000 families, the homes of 6,200 families were reported as in very poor conditions. (State Tasnim news agency – February 29, 2016)

In another case Farahnaz Rafe, head of the Red Crescent Volunteer Organization reported babies were rented for $5 a day and being sold at around $575.

In the month of March, women in Iran were targets to acid attacks. Two young women became victims to such an attack in the city of Semnan, east of Tehran. They suffered 20 and 40% burns. (State khabaronline.ir – February 28, 2016)

The issue of child brides gained attention in a meeting held by Hassan Rouhani’s deputy in women and family affairs.

“We have requested from the Justice Ministry to deliver a report on early marriages and girls under the legal age to the Department of Women and Family Affairs,” Shahindokht Molaverdi said. “In the past one or two years we have witnessed even girls under the age of 10 being given off,” she added. (State ISNA news agency – February 29, 2016)

On March 8, 2016, a group of female labor and civil activists rallied in Ferdowsi Avenue to commemorate International Women’s Day. Security forces attacked participants, yet the women refused to back down and continued to hold their gathering.

Moreover, coinciding with the birthday of Kianush Asa, a martyr of the 2009 uprising, his mother and other family members gathered at his grave in Kermanshah, western Iran, holding a gathering in his memory. Asa was a very gifted college student studying for his majors in Tehran’s Science and Technology University. He was targeted by security agents during a demonstration on July 16, 2009.

“Iran without Executions” was the title of a document posted by Mrs. Sholeh Pakravan, the mother of Reyhaneh Jabbari, in her Facebook account on the eve of Norouz.

“Last year a number of people were executed during Norouz holidays. The executing machine has proven it will take advantage of neglect to the greatest extent. We have to be aware and every day we have to think about Iran without executions.”