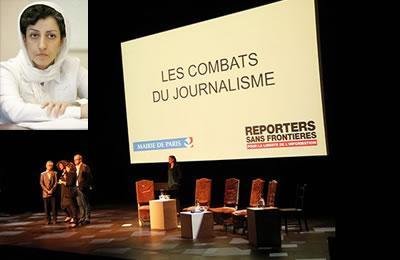 Narges Mohammadi, the imprisoned spokeswoman for the League of Human Rights Advocates in Iran, won the medal of “Heroes of freedom of Information.”

On the eve of May 3, World Press Freedom Day, Reporters without Borders and the Municipality of Paris held a large gathering called “the Battle of Journalism” to commemorate freedom of information. In the gathering held on Monday, May 2, 2016, Paris’s Mayor Ms. Anne Hidalgo, expressed her support for all those making efforts for the cause of freedom of expression. She awarded the medals to four winners and praised their efforts.

Narges Mohammdi was not able to attend the gathering as she is currently detained in Evin prison and banned from travelling abroad. Taghi Rahmani, Narges’s husband received the medal on her part and spoke out about the situation of Evin. Afterwards, part of Narges Mohammadi’s message was read to the audience.

Iran – women: What did cartoonist say upon release?