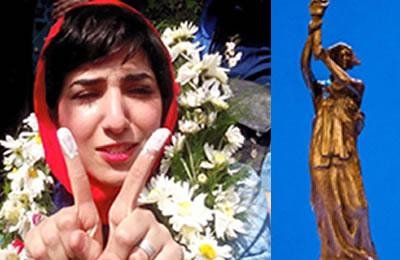 The 2016 laureates are Iranian cartoonist Atena Faraghdani, Russian performance artist Petr Pavlensky, and Uzbek photojournalist Umida Akhmedova. They will be honored in a ceremony during the 2016 Oslo Freedom Forum on Wednesday, May 25.

Atena Faraghdani was a prisoner of conscience of the Iranian regime.  She received a 12-year prison sentence for a cartoon she posted on social media depicting Iran’s parliamentarians with animal heads. Faraghdani was charged with “colluding against national security,” “spreading propaganda against the system,” and “insulting members of the parliament.”

When she was briefly released in 2015, Faraghdani publicized the abuse that prisoners suffer in Iranian jails and was promptly put back behind bars. Faraghdani then went on hunger strike and suffered a heart attack while in prison. Her case sparked the social media campaign #Draw4Atena, with cartoonists from all over the world sharing their work in support of her case. Faraghdani was released on May 3, 2016.
“Iran’s Foreign Minister recently said that Iran does not jail people for their opinions. This is a blatant falsehood, and Atena Faraghdani’s imprisonment flies in the face of any such claims,” said Havel Prize committee chairman Thor Halvorssen.
The three Havel Prize Laureates will receive an artist’s representation of the “Goddess of Democracy”. The Laureates will also share a prize of 350,000 Norwegian kroner.
The Havel Prize ceremony will be broadcast live online at oslofreedomforum.com Human Rights Foundation (HRF) is a nonpartisan nonprofit organization that promotes and protects human rights globally, with a focus on closed societies. (Human Rights Foundation website – May 5, 2016)