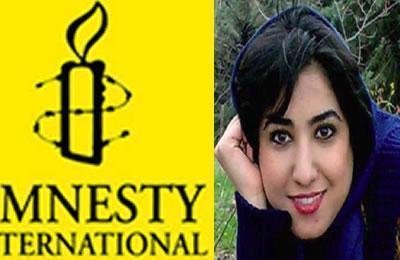 Iran – women: AI calls for freedom of all prisoners of conscience

In a statement published on May 4, Amnesty International said the long-overdue release of Atena Farghadani must be followed by “the immediate and unconditional release of other peaceful artists and activists who remain behind bars.”

“Atena Farghadani’s release represents a legal and moral victory for her and encourages the efforts of activists worldwide to campaign for the release of other prisoners of conscience in Iran, as well as for reforms to the unjust laws used to put them behind bars in the first place,” said Magdalena Mughrabi, interim Deputy Director of the Middle East and North Africa Programme at Amnesty International.

“While this is a time for celebration, it is vital that the world doesn’t forget that Atena Farghadani should never have been imprisoned in the first place and that many others like her continue to languish in cells or have the threat of prison hanging over their head for peacefully exercising their rights,” she added.

“Of course, a prisoner release is only a first step – the Iranian authorities must also reform the country’s repressive laws, which for too long have been used to clamp down on dissent. As long as these laws remain on the books, human rights defenders and activists will remain at risk of being jailed simply for expressing their opinions.”