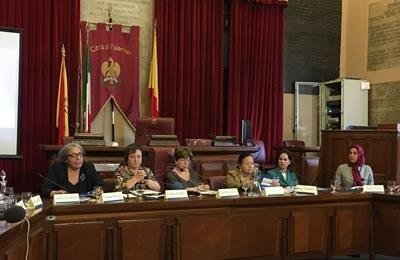 An international conference entitled, “Different Lands, Common Goals”, was held from April 21 to 23 in the city of Palermo, Italy

The conference was sponsored by the International Federation of Women in Legal Careers, Italy.

The conference was held with the support of local and Sicily organizations. Jurists from Italy, Argentina, Brazil, Turkey, France, and Finland attended the conference and the NCRI Women’s Committee delegation participated as special guest speaker.

The first day of the conference was held in one of the main halls of the Municipality Palace in the city of Palermo. This day’s discussions focused on “Istanbul Convention, an applicable platform.” In addition to jurists from Italy and Brazil who participated, prominent personalities addressed the conference. They included Ms. Maria Elena Elverdin, President of the International Federation of Women in Legal Careers (Argentina), Ms. Anna La Rana, Vice President of the International Federation of Women in Legal Careers (President of Italian federation); Mr. Leoluca Orlando, Mayor of Palermo; Mr. Salvatore Orlando, head of Palermo’s City Council; Mr. Giovanni Ardizzone, head of the Sicily Parliament; Mr. Gioacchino Natoli, head of the Appeals Court of Palermo; and Ms. Michela Giuferida, Member of the European Parliament from Sicily.

The conference was opened by Ms. Maria Beatrice Scimeca, chair of the conference and President of the Federation of Women in Legal Careers in the city of Palermo.

The first day of the conference concluded with the speech of Ms. Elham Zanjani, from the NCRI Women’s Committee. She spoke about the Iranian regime’s misogynous laws based on a fundamentalist outlook, the status of women in the Iranian Resistance and her own observations during the attack on the city of Ashraf in 2011 where she was seriously wounded. Ms. Zanjani’s impressive account was well received by the audience and the press covering the conference.

The second and third days of the conference addressed the issues of “Immigration and citizenship laws” and “Supporting education for retarded children’s caregivers.”

Senior lawyers, judges, officials in charge of refugee affairs and social personalities in Italy and other countries who deal with the refugee crisis, including Turkey, spoke on the issue and proposed legal solutions to support the asylum seekers.

On the third day of the conference, participating delegations from different countries including the NCRI Women’s Committee delegation received awards.

Solidarity is our greatest asset

My name is Elham Zanjani, and I represent the Women’s Committee of the National Council of Resistance of Iran, the opposition to the religious fascism ruling Iran…

I would like to begin my remarks by saluting my sisters in Iranian prisons, the bereaved but outspoken mothers of prisoners and execution victims, and also my fellow sisters in Camp Liberty, Iraq, who are steadfast in their struggle to free Iran despite attacks and numerous other threats….

A fundamentalist regime has been ruling Iran for more than 37 years. Its main character is enmity to women. In the past three, four decades, nowhere in the world have women been tortured and executed in such great numbers or assaulted in prisons as they have been in Iran.

120 000 members of our movement have been executed by the Iranian regime for their opposition, among which 30% were women.

Fatemeh Mesabah, was only 13 at the time of her execution and Mojgan Jamshidi, only 14 when she was executed.

We will not tolerate violation of women’s rights under the guise of religion or under any other pretext.

We advocate democratic Islam in the face of extremism and exploitation of religion. The anti-thesis to the fundamentalist regime is the leader of our movement, a woman named Maryam Rajavi who is the hope of a free and democratic Iran…

In recent years, a large number of women have been executed on alleged charges or for petty crimes. At least 67 women have been hanged in Iran under Rouhani. Reyhaneh Jabbari, that courageous young woman, and so many other Reyhanehs whose names are unknown.

Just this week, simultaneous with Federica Mogherini’s visit to Iran on April 14, two women were executed. Unfortunately, she did not speak even a word about halting the ongoing executions. They put no pressure on the Iranian regime for human rights. Unfortunately, the issue of human rights violations was not even mentioned. These unheard voices are elements of a raging storm that will ultimately eradicate women’s enemies….

Our movement is led by a woman, her name is Mrs. Maryam Rajavi. She is a Muslim woman who believes in the separation of religion and state and has drafted a ten-point plan which states that we believe in complete gender equality in political, social and economic arenas.

After the overthrow of the mullahs’ religious tyranny, we plan to abolish the death penalty and create a democracy based on freedom, equality, and separation of religion and state.

We seek to restore women’s equal rights in all areas, including their equal fundamental rights and equality before the law, in the economy, and in the family, as well as their freedom of choice in clothing, and their active and equal participation in political leadership….

Now, allow me to take this time to draw your attention to 1000 vanguard women of the Iranian Resistance who are in Camp Liberty, who are standing in the front line against the Iranian regime along with other members of the resistance. These women are inspirations to women and youth in Iran. The residents of Camp Liberty have been the victims of a number of deadly attacks on behalf of the Iranian regime and their proxies in Iraq.

I myself am a victim of attacks because I lived in Camp Ashraf and on April 8, 2011 Special Forces of Iraqi former Prime Minister Maliki, affiliated to the Iranian regime in Iraq attacked the defenseless residents. This had been the second deadly attack to the camp. I was severely injured in the attack and many of my friends were killed such as Asieh, Saba, Mahdieh, Shahnaz and Fatemeh. So, witnessing such injustice, I have decided to devote my life to be their voice and to speak about their courage and dedication to establishing a free and democratic Iran where no girl will be given to marriage at the age of 9 and no woman will have to sell her child before it is born because of poverty and no woman will have to be subject to systematic violence and suppression for what she wants to believe in, how she wants to live her life and what she wants to wear….

I call on you today to defend the courageous women of Camp Liberty who are vulnerable to any attack even today and ask you to stand with the resistance who is the anti-thesis to the fundamentalism that is ruling Iran and endangering the world.

Solidarity is our greatest asset.

Let us expand our chain of unity from Iranian prisons and infernos of fear in the Middle East to wherever there is oppression.