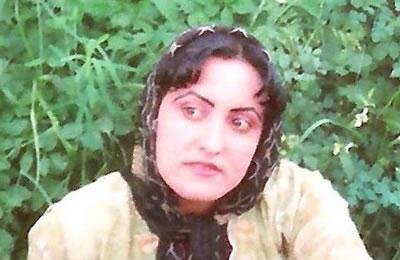 On the anniversary of execution of five Kurdish political prisoners, including Shirin Alam Houli, excerpts of her letter from prison explaining what happened to her in prison appear below:

I was arrested in Tehran in May 2008 and was directly taken to the Revolutionary Guards HQ. Immediately upon arrival and before any questions and answers, they started beating me.

Overall, I stayed 25 days in the IRGC HQ. I was on hunger strike for 22 days and suffered various forms of physical and mental torture all the time.

The interrogators were men. They tied me to the bed and used electrical shockers, cables, kicks and punches to beat me in my head, face and all over my body and the soles of my feet. At that time, I could hardly understand Farsi. When they did not get any answers to their questions, they beat me up so harshly until I went unconscious.

When they saw that I insist on my hunger strike, they inserted tubes through my nostrils and into my stomach and tried to break my hunger strike by force. I resisted this and pulled out the tubes which led to bleeding and had a terrible pain so much that its effects still hurt me after two years.

One day, as I was being interrogated, they kicked me hard in the abdomen and I started bleeding readily.

Another day, one of the interrogators came to me and asked irrelevant questions. When he did not hear any answer, he slapped me hard in the face and pointed his gun at my head and said: “Answer the questions I ask you. I know that you are a terrorist. Whether you speak or you don’t, we are happy to have captured a member of PEJAK.”

One day they took to a hospital presumably for treatment. I was blindfolded and handcuffed. The doctor laid me on the bed and gave me an injection after which I did not have any control over myself. I gave them the answers they wanted and they took films from this. When I came to, I could not understand where I am and then I found out that I was still on the hospital bed. Subsequently, I was taken back to my cell.

All this was not enough for the interrogators. They wanted me to suffer more. They made me stand up on my wounded feet, until they swelled badly. Then they brought me ice.

At nights, we heard screams, yelling, moaning and crying. This made me really nervous. Later, I found out that these sounds had been recorded.

Sometimes, in the interrogation room, they made me sit where cold water dropped down on my head, drop by drop and returned me to my cell at night.

One day, I was sitting blindfolded on the chair and being interrogated when the interrogator extinguished his cigarette on my hand.

Another day, he pushed down on my foot with his shoes so hard that my nails turned black and came off. Sometimes, they made me stand all day in the interrogation room, without asking any questions and themselves, played chess.

After they brought me from hospital, they wanted to take me to Ward 209, but the ward turned me down because of my physical condition. I could not even walk as a result of torture. They kept me at the ward’s gate all day in that condition.

I could not distinguish night and days. I do not know how many days I stayed in the dispensary of Evin, until my wounds were a little better. Then I was transferred to the 209 and the interrogations resumed.

The 209 interrogators had their own methods and techniques. Initially, a harsh interrogator would come and torture me. He would say he does not care about any law and he can do with me whatever he wants to… Next came a “kind” interrogator and asked him to stop. Then he would offer me a cigarette and start repeating the same questions. And this futile round went on and on…

When I was detained in ward 209, especially in the early days when I was under interrogation, I did not feel well and kept bleeding from the nose but they kept me in the cell and just gave me a pain-killing injection…